Corporations frequently establish joint research partnerships with universities in diverse ﬁelds; however, such collaboration seldom occurs in algal research, which has almost exclusively remained within the province of universities.

Research conducted with joint US academic and non-academic industrial corporate participants has focused almost exclusively on the harvesting and use of algae to produce energy as biodiesel. This tendency is understandable since algae, as a non-commodity, presents an attractive option for the production of biofuel. Compared to crops used to produce vegetable oil for biofuels, algae is far more productive, able to generate up to 50 times the yield of oil per acre. Nevertheless, the attraction of biofuels – and research therein – peaks and wanes relative to ﬂuctuations in the price of petroleum as well as the availability of federal and state subsidies in the United States for biodiesel production and consumption.

As algal research continues in the quest to establish a more economically suitable and energy-neutral biofuel, another aspect of research into algae usage has been taking a different approach – and making signiﬁcant strides in recent years: converting algae as a waste into high-value bioproducts for use in algae-based bioplastics, industrial gums and chemicals, food products, and pharmaceuticals.

Leading this research effort is the US-based Utah State University’s Sustainable Waste-to-Bioproducts Engineering Center (SWBEC), which is engaged in developing processes for more efﬁcient harvesting of algae from municipal wastewater sources and researching its conversion into products that are much higher-value resources, compared to conventional applications such as energy production or livestock feed.

Different from the energy-related algal research conducted within university laboratories, which stress research of single-strain algae and almost exclusively depend on indoor, controlled environments and small-scale ﬁeld operations, SWBEC’s bioproducts research encompasses a much more comprehensive and larger-scale model. Using mixed-algae cultures from municipal wastewater open-pond lagoon streams, it uses the largest algal ﬁeld laboratory in the world, one that is hundreds of times bigger than any energy-related algal ﬁeld site.

When open-pond lagoon systems are used to treat wastewater, algae naturally grow by up-taking the growth nutrients, phosphorus and nitrogen, from the wastewater. A nutrient-rich stream of bioproducts can be produced from the resulting algae biomass. This process delivers a double-sided beneﬁt because the lagoon wastewater quality is improved as the levels of phosphorus and nitrogen are simultaneously reduced.

The open-pond lagoon system used by SWBEC is part of the City of Logan, Utah, Wastewater Treatment Facility, which is also a SWBEC partner. The 186-hectare lagoon, which treats municipal wastewater for Logan, has enough nutrients to produce 27.2 metric tons dry weight of algae per day from April through October. The algae growth, aided by natural sunlight, can be harvested daily for use in SWBEC’s research programs. Environmental Department but also WesTech Engineering, Inc., an engineering ﬁrm and manufacturer of water and wastewater treatment processes for municipal and industrial applications. WesTech is based in Salt Lake City, Utah.

The SWBEC is a collaboration that involves not only the Utah State University Biological Engineering Department and the City of Logan Environmental Department but also WesTech Engineering, Inc., an engineering ﬁrm and manufacturer of water and wastewater treatment processes for municipal and industrial applications. WesTech is based in Salt Lake City, Utah.

“Our interest is in technologies that can have a positive impact on social conditions, as well as be economically self-sustaining on a long-term basis,” WesTech CEO Rex Plaizier says. “This is what drew us to the research that SWBEC has been engaged in, and why we elected to partner with them.”

SWBEC commissioned WesTech in 2010 to design an algae growth reactor, which, to their knowledge, was the world’s ﬁrst rotating algae bioﬁlm reactor (RABR). This result was based on a concept of algae bioﬁlm developed by the Utah State Biological Engineering Department. The bioﬁlm reactor was designed for harvesting large amounts of algae with applications for large-scale open-pond lagoons and raceway engineered systems.

“Algal bioﬁlm systems in wastewater treatment have emerged as an alternative to suspended algal growth systems because of the ease of biomass harvesting and reduced costs in downstream processing,” says Utah State University Professor and Co-Director of SWBEC, Dr. Ronald Sims. “Research studies at Utah State demonstrate that algal bioﬁlms grown using the RABR are very effective in removing nitrogen and phosphorus nutrients from wastewater.”

The ﬁrst RABR was installed at as part of SWBEC’s Algae Test & Evaluation Facility at the Logan lagoons. It was developed as a ﬁeld-scale site where outdoor research and testing is conducted, using phototrophic algae-based engineered systems for algal biomass production and water quality improvement.

The full-scale RABR is contained within a 14,500-liter tank. Additionally, three pilot-scale RABR systems are operating within a tank of more than 4,000 liters, as well as two .1-hectare open-pond raceway bioreactors, each having a capacity of more than 150,000 liters. Each of these systems is capable of supplying and discharging required water and is instrumented in obtaining photosynthetically active radiation, temperature, dissolved oxygen, and pH readings.

Read more about the benefits of the Rotating Algae Biofilm Reactor. 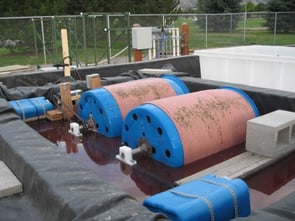 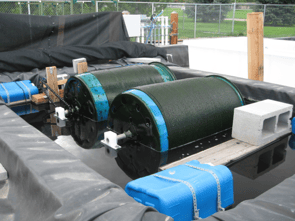 Left: Outdoor RABRs in produced water for cultivating and harvesting microalgae, at inoculation.

Once the algae is harvested, researchers at SWBEC’s Algae Processing and Products Facility, located on the campus of Utah State University at Logan, study algae processing – from algae biomass production using open-pond raceways and rotating algae bioﬁlm reactors, to chemical, biological, and thermal pretreatment, to the production of bioproducts.

“The processing of single- and mixed-culture algae are cultivated in raceways and RABRs for the production of phycocyanin from cyanobacteria growing on produced water, as well as acetone, butanol, and ethanol production from wastewater algae,” Dr. Sims says. “Testing the characterization of algae bioﬁlm structure, function, physiology, and lipid production is conducted at this facility.”

Subsequent to algae processing, SWBEC has established a fermentation laboratory, designed to enable the optimization of bio- products produced by fermentation technologies. The lab has the capacity to produce these products on a large scale. Its purposes include generating substantial quantities of bioproducts for commercialization and scaling-up performance data.

The laboratory houses two 10-liter fermenters with carbon dioxide and oxygen off-gas analyzers. For large-scale fermentations, the lab uses a 125-liter fermentation system, and it is equipped with several sizes of centrifuges for cell and product recovery. The capabilities of this fermentation laboratory enable scale-up optimization of fermentation bioproducts that can be grown and analyzed under a variety of growth conditions for maximum product yield and quality.

Waste-based bioenergy, bioplastics, and other bioproduct technologies developed through the unique SWBEC partnership provide new alternatives for addressing sustainable waste treatment and bioenergy production. The SWBEC is conducting numerous research projects, including those described below.

PHBs can be expensive to produce and purify. To reduce bioplastic production costs, a side stream generated from an algal lipid extraction procedure can be used as a medium for bacterial growth. This aqueous waste stream is one of the four streams generated via the wet lipid extraction procedure (WLEP) used for processing wet algal biomass to produce feedstock material for biodiesel production. The aqueous phase generated is rich in soluble nutrients and can be used as a medium for bacterial growth. Results obtained by SWBEC research indicate that the aqueous stream generated from algal biodiesel production can be used for PHB production to help lower the cost of biodegradable bioplastic production.

Acetone, Butanol, and Ethanol (ABE) Production from Algal Biomass: The SWBEC team has developed a novel process to produce acetone, butanol, and ethanol (ABE) from micro-algae biomass harvested from the Logan wastewater lagoon system. ABE are high-value and high-energy products that can be produced from algae. Micro-algae can contain up 50 percent sugar polymers by dry weight, making them an attractive feedstock for fermentations for the production of high-value bioproducts. Butanol has the potential to be implemented as a drop-in fuel to replace large quantities of petroleum-derived products. ABE is produced by anaerobic and solventogenic clostridia, where ABE is typically produced in a 3:6:1 volumetric ratio respectively. These microorganisms initially ferment reduced sugars, producing acids, namely acetic and butyric acid, as metabolic byproducts. Batch fermentations using Clostridium saccharoperbutylacetonicum has been shown to produce ABE from wastewater micro-algae feedstocks and ABE from residual algae biomass, which is generated from post-lipid extraction of the algae for biodiesel production.

This integrated process allows additional streams of revenue to be generated, which will signiﬁcantly reduce the costs of producing these high-value bioproducts. The ability to produce these bioproducts, along with integrating technologies for additional revenue, will have signiﬁcant implications in the production of renewable energy.

SWBEC is investigating, optimizing, and scaling up ABE production from algae feedstocks. Algae concentrations, as well as supplementations of extraneous sugars, acids, and enzymes into the fermentation media, are being investigated for optimization of ABE from algae biomass.

Produced water is wastewater from the oil and natural gas industries that is pumped along with oil and gas to the earth’s surface. It is the largest waste stream generated by these industries.

Utilization of the RABR as a growth platform with cyanobacteria and produced water allows for the harvesting of a pre-concentrated bioﬁlm, bypassing costly dewatering procedures and equipment. The rotating nature of the RABR plat- form enables it to be used in the often-turbid existing produced water ponds, allowing the cyanobacteria to grow in a much deeper pond than a traditional algae raceway would allow. In addition to allowing the use of existing ponds, this feature also reduces the physical footprint of an algae facility, allowing for more productivity per unit area of land.

Linear tetrapyyrole bile pigments are potentially high-value, naturally occurring products that can be synthesized from cyanobacterial phycocyanin. Desirable properties of bile pigments include high anti- oxidant activity, anti-inﬂammatory properties, and anti-viral activities. The varied and high demand properties of these compounds increase the commercial potential of bile pigments for many areas of application. Current production of desirable bile pigments is very expensive, as they are often sourced from animal materials.

Production of phycocyanin from cyanobacteria is a potentially cost-effective and sustainable way to obtain large quantities of this chemical feedstock for conversion into desirable bile pigments. Their extremely large genetic diversity also leaves open the possibility of the production of many other useful bioproducts.

Wet Lipid Extraction: The production of biodiesel from algal biomass requires the extraction of the lipids or oil from the harvested algae biomass. However, typical methods of extracting oil from algae have several drawbacks, including signiﬁcant energy investment, costly solvents, and contamination.

SWBEC developed a wet lipid extraction procedure to help address these issues associated with algal lipid extraction and biodiesel production. The procedure is capable of extracting up to 79 percent of the algal lipids from wet biomass by acid and base hydrolysis of the algal biomass, followed by phased separation steps. Of the lipids extracted from the wet algal biomass, up to 77 percent of those lipids can be collected for the production of biodiesel.

In addition to the isolated algal lipids processing, algal biomass using this wet lipid extraction procedure generates four streams, three of which have been used for the production of additional bioproducts and biofuels. These streams are:

“The Utah State University-WesTech Engineering partnership provides a model for how together we can accelerate the process of going from knowledge discovery to application and implementation of critical engineering solutions to improve the quality of life,” says Plaizier. “It is a corporate-academic partnership unique to algal research.”

Floyd Grifﬁths is the lead process engineer at WesTech, based in Logan, Utah, United States.