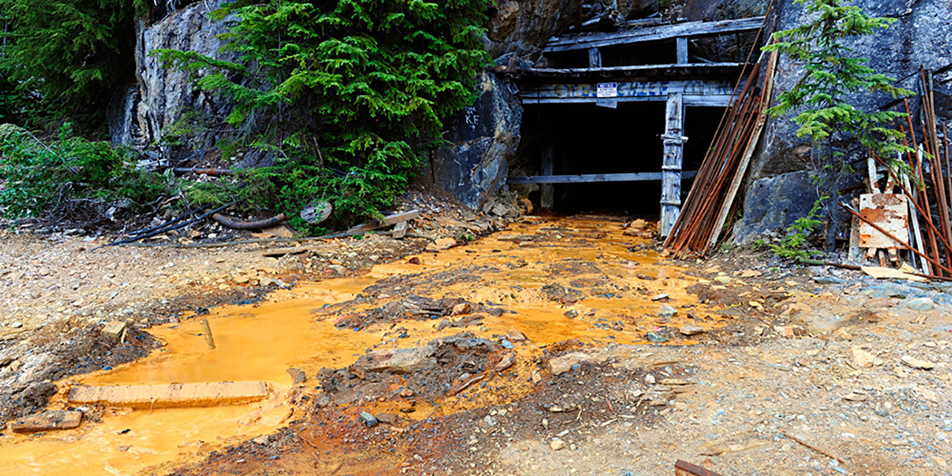 Acid mine drainage and acid rock drainage is a rampant problem in the world today. The above photo depicts acid drainage at an abandoned mine in the Yukon Territory of northwest Canada. This mine shares a similar history to thousands of other mines throughout the world. It was in operation for six short years in the 1950s, producing gold ore. Its profitability eventually failed and it was abandoned. In the years following, the mine changed ownership several times, making it very difficult for the government to enforce treatment for the acid rock drainage that the mine created.

What is Acid Mine Drainage?
Acid mine/rock drainage occurs naturally within some environments as part of the rock weathering process, but is significantly exacerbated by mining, usually within rocks containing an abundance of sulfide materials. As water comes in contact with the sulfur, it creates a sulfuric acid. The sulfuric acid then dissolves and leaches out the metals that are in the ore, creating high concentrations of dissolved metals such as iron, arsenic, and cadmium. As the water is exposed to oxygen, it oxidizes. When this occurs, all of the oxygen in the water is consumed, making the water uninhabitable for aquatic life. Moreover, the rust and heavy metals in the water make it unusable to all of the wildlife that depends on that water source for survival. The unsettling rust color of the water also serves to make acid mine drainage an easy/prime target for environmental agencies around the world.

How Can It Be Treated?
Here in the United States, the Bureau of Land Management estimates that between 80,000 and 100,000 abandoned mines exist within the US. Fortunately, most of these mines are relatively small in size, as are the acidic streams coming out of them. As such, these mines can be treated by smaller, more passive-type systems. Some of these passive-type systems are shown in the diagram below – limestone drains or open limestone channels: 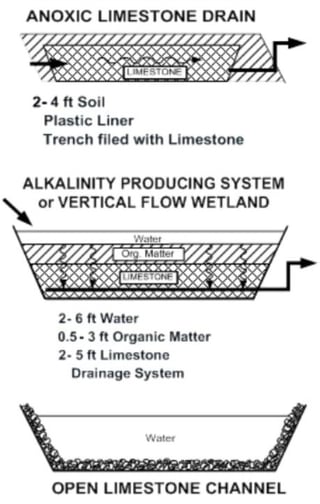 Acid Mine Drainage Flowsheet
For large acid mine flows, WesTech Engineering has developed the following flowsheet:

As an equipment manufacturer specializing in liquid/solids separation, WesTech has designed and installed a large number of acid mine drainage treatment systems. WesTech has provided full-system solutions as displayed in the flowsheet, as well as “bits and pieces” as a client has required.

Want to learn more about equipment options for this process? Visit our Acid Mine Drainage solutions page.

Treatment Step: De-carbonation
The first step in the acid mine drainage flowsheet is de-carbonation. In many cases, chemical consumption is the number one operating cost of an acid mine drainage treatment system. As such, it is critical that chemical usage be optimized. Typically, with acid mine water, there is a high amount of CO2 in the waste stream. CO2 is, of course, fairly harmless by itself. However, if allowed to remain in the waste stream, it will compromise and consume much of the chemicals necessary for treatment of the water further downstream. Removing this CO2 should be priority number one.

The best way to minimize CO2 is through aeration or agitation, best accomplished via a de-aeration/de-carbonation tank. The gear drive and motor sit atop the walkway, and the aerator agitates the water underneath.

The design of the de-aeration/de-carbonation tank is solely based off of hydraulics relative to the load of incoming CO2. If there is a relatively high amount of CO2 (above 100 mg/L), we recommend a hydraulic retention time of 30 – 40 minutes. During this time, the slow-speed surface aerator will agitate the water, causing oxygen and/or nitrogen to displace the CO2, at which point the CO2 will simply off-gas. 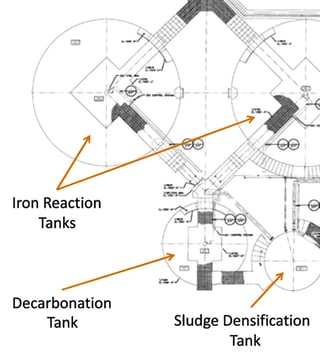 The image above is a “top view” displaying the iron-reaction process. As the flow exits the de-carbonation tank, it splits through two troughs on its way to the iron-reaction tanks. The sludge densification tank is off to the side – it is in this tank that the necessary chemical is added. This chemical is then distributed to the iron-reaction tanks where it reacts with the soluble iron, densifying the slurry of the de-carbonated acid mine drainage. In this step, oxygen reacts with iron to change the actual state of the iron from a ferrous hydroxide (soluble) to a ferric hydroxide (non-soluble). This ferric hydroxide settles much more quickly, providing the first liquid/solids separation step of the treatment process.

This image illustrates the difference between states of iron as it changes from ferrous hydroxide to ferric hydroxide. The tank on the left containing the blue/green water is the de-carbonation stage. This blue/green water contains an extremely high iron concentration – just as high as in the reaction tank – but it is ferrous hydroxide. Then, as it travels to the reaction tanks, it changes state to the more rust-colored ferric hydroxide.

Sizing of the reaction tanks is determined using the same process as the aeration tanks described above. 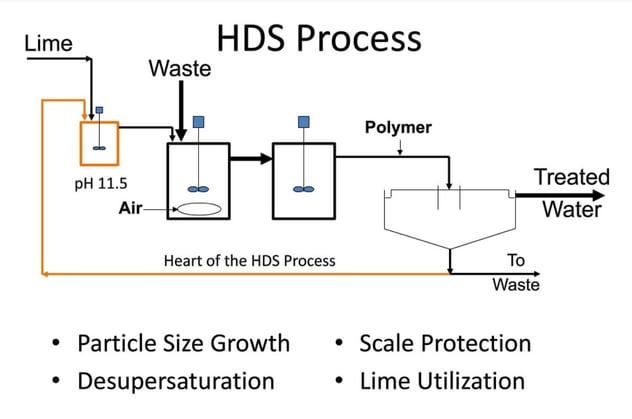 The orange lines in the above diagram illustrate the functional difference in a high-density sludge process as compared to the traditional process in which lime is introduced with the waste in the aeration tank itself. As you’ll see, the HDS process offers advantages to acid-mine drainage treatment that are not seen in the traditional process:

1. The underflow solids already contain lime. Recirculating these solids allows previously-unreacted solids more time to fully react with the lime. This, of course, allows full utilization of all the lime within the process, minimizing any excess chemical dosing that otherwise may be required.

2. As lime is introduced into the tank, it coats onto the outside of the recirculating particles and encourages particle-size growth. As such, the previously-unreacted iron will react with the particles, making them larger, denser, and easier to settle. These particles grow and act as seeds for the remaining unreacted iron to attach to. In this way, the HDS process prevents the “scaling” that often occurs in traditional treatment systems.

Experience has shown us that proper use of the HDS process can create 30-40% thickener underflow concentration – a gigantic improvement over the 1-2% often seen in traditional systems.

Another key thing to remember is that, as there is no biology involved, it is possible to fully optimize the HDS process through laboratory testing. It is also possible to fully determine required recirculation rates and the sizes of reaction tanks and clarifiers – all before beginning to design the process.

Chemical Addition
There are typically two chemicals that WesTech recommends adding to the stream within an HDS process as discussed above. First, a polymer to be added as the water flows from the reaction tanks to the clarifier, and second, of course, is lime.

Treatment Step: Thickening
The next step in the treatment process is the thickening step – settling and removing the non-soluble iron from the liquid.For optimal performance, the thickener should be sized between 0.3 and 0.4 GPM per square foot. It is ideal to use a variable-frequency drive (VFD) to power the rake arms, allowing you to slow the rakes down as necessary. There are times – especially when plants don’t utilize the HDS process – that the bed of a thickener can be abnormally “light and fluffy.” At these times, if the rake arms are travelling too quickly, they can actually disturb the thickener bed to the point where the “fluffy” underflow can get mixed up and actually go over the weirs. It is obviously critical that that be avoided at all costs. To reiterate, there are two ways to ensure that this doesn’t happen. First, conservative sizing of the thickener. Second, the use of a VFD.

Other Mine Drainage Types
Mine drainage water is not always strictly acidic. Many times, WesTech has received requests to develop treatment for neutral mine drainage – water that contains a fairly normal pH, but also contains a high amount of heavy metals and other dissolved solids that need to be removed in order to meet regulatory requirements. In the absence of acidic water, the use of lime is often not necessary to settle out the iron.

In these cases, hydrogen peroxide can often be used instead – as well as a number of other chemical options – potentially reducing chemical costs. However, without the lime (and the heavy calcium it contains), the thickener bed is bound to be much lighter – probably as low as 5% solids, even while using the HDS process. With such a light bed, it is unnecessary to use a VFD. In fact, in many cases, the thickener itself might not be necessary. Instead, WesTech might recommend considering the use of a recirculating-type clarifier, or a solids contact clarifier.