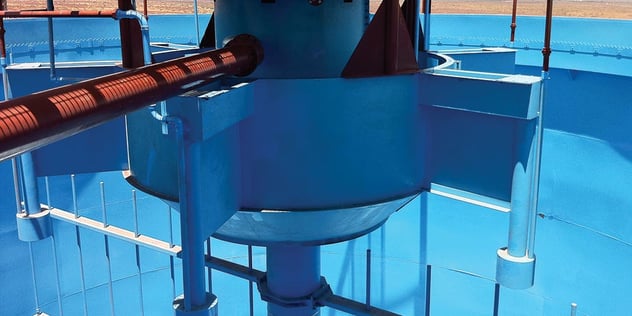 Philip Lake reviews WesTech's EvenFlo™ feedwell design for the even distribution of the feed slurry in order to provide the end user with the most economical thickener in terms of flocculant consumption and size.

Gravity thickeners concentrate suspended solids in minerals slurries. These slurries typically are introduced at the center of the tanks and allowed to thicken to the desired density. A key component of any thickener is the feedwell, which has the following functions:

It is critical to introduce the incoming thickener feed in an even and concentric manner in order to overcome short circuiting of fine unsettled solids into the overflow launder.

In the past, uneven distribution and the related short circuiting of unsettled solids were overcome by adding more polymer or providing larger sedimentation vessels. Both have had significant cost implications. Uneven distribution of the feed into the thickener also results in the uneven deposition of coarse solids leading to a sand bar on the thickener floor. As a consequence, the rake arm gets bogged down in this area with the resultant torque spikes being encountered by the thickener drive.

WesTech developed an improved system, method and/or apparatus for the even distribution of the feed slurry in order to provide the end user with the most economical thickener in terms of polymer consumption and size. This report introduces the WesTech EvenFlo feedwell design that addresses these issues.

Many thickeners suffer from short circuiting and high flocculant consumption because of poor feedwell design, as shown in Figure 1 below. The rotational flow in the feedwell is often carried into the body of the thickener and has the effect of “blowing out” on the side opposite to the feed entrance.

It also results in heavier solids settling out prematurely in one concentrated area causing torque spikes. The uneven flow means only a portion of the thickener is used for gravity separation, and the type of turbulence in the thickener is not conducive to quiescent gravity settling. With a directional feed flow, flocculant mixing is not as efficient as there is no defined mixing or shear region to evenly disperse the flocculant. In addition, current feedwell designs are not conducive to feed turndown, which can also adversely affect distribution.

Through the use of Computational Fluid Dynamics (CFD), it is possible to compare the three most common feedwell configurations. The purpose is to note the differences in distribution patterns and to determine if the WesTech EvenFlo feedwell addresses the issues associated with short circuiting and inadequate flocculant mixing.

This is the most common feedwell design used in the industry today. The intent is for the angular momentum in the feed to carry the flow to the opposite side of the feedwell and then dissipate momentum as the material continues to swirl in the feedwell.

A bottom shelf has been used in some thickeners in an effort to divert the downward momentum of the feed slurry.

The two-stage design first uses an inner channel to convert the tangential feed energy into a concentric radial flow that empties into the main feedwell. In the second stage, the flow exits the inner channel through bottom parts, directing the flow radially outward into the feedwell, for optimal mixing of flocculant and solids, uniquely utilizing all area of the feedwell volume.

This method extends the optimum mixing zone around the full periphery of the outer feedwell, providing the largest consistent mix zone in the industry and creating an environment to produce fast-settling floccules. In addition, the EvenFlo’s outer feedwell provides a very robust, effective self-dilution system, using ports to return clean water to the feedwell from the clarification zone.

The three different feedwell configurations are studied side by side using the same flow rate and feedwell diameter. The distribution of solids becomes less concentric to the feedwell for the tangential flow and deflector designs. The EvenFlo design creates a large, efficient area of mixing intensity (feed velocity).

The common tangential flow feedwell design shows a great tendency to short circuit and carry solids out the top of the thickener. Although the results are marginally better for the deflector feedwell, the issue of rotational momentum being carried through to the body of the thickener is not addressed. The angular momentum is not effectively arrested. The EvenFlo feedwell achieves good feed distribution into the thickener tank. Figure 2 shows how the EvenFlo feedwell changes the feed rotational momentum to radial flow. The arrow shows the gap where the radial flow begins. It clearly shows rotational flow at the top and then radial flow after moving through the constriction. The arrow marks the constriction. Figure 3 shows the path lines and the intensity of flow. 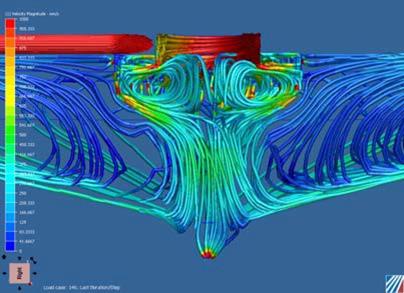 CFD analyses of velocity profiles close to the effluent discharge around the perimeter of the clarifier confirm that EvenFlo velocities are very even and less than one-fifth the average of velocities from a conventional feedwell.

Their model shows solids exiting the inner chamber where flocculant is added in a brief, high velocity region. Flocs then quickly grow in the main zone of the feedwell and are evenly discharged.

Thickeners often require dilution of the feed to improve settling rates and flocculant consumption. Dilution systems that rely on specific gravity differential between the feed and supernatant are often limited. WesTech’s AirLift™ dilution system uses an airlift pump to draw clarified water evenly from the thickener surface into the feedwell. An even draw from multiple points prevents flow disturbances in the quiescent settling zone while ensuring proper dilution/ feed mixing inside the feedwell. Dilution flow can be regulated with precision by operator or automatic adjustment of the airflow to the system.

WesTech now has a number of EvenFlo feedwells installed or in various stages of production. WesTech’s EvenFlo design consists of a two-part feedwell system. An inner chamber converts the feed energy into a concentric radial flow. The main feedwell chamber then evenly distributes the feed into the sedimentation zone of the thickener. The WesTech EvenFlo feedwell provides the following benefits:

The EvenFlo feedwell also prevents the following operating problems consistent with many thickeners: