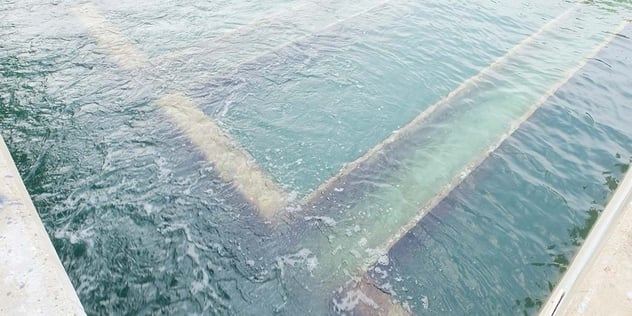 Thousands of water and wastewater treatment facilities use granular media filters. An operational control system – along with media configuration, underdrain system, and backwash process – is an important consideration because it determines how water flow is controlled through the filter.

Four basic types of operational control systems are used in gravity filtration, with some variances from plant to plant. Each has advantages and disadvantages.

Selecting the best filter operational control system option entails understanding which one works best in unison with the overall plant design. Filter control considerations should be taken into account with each redesign, or in the initial stages of development if a new plant is being constructed.

For existing facilities, understanding how operational control systems work is important because it helps operators improve water quality and maintenance, as malfunctions can damage a filter bed and allow sudden changes in the filtration rate.

The rate control design also varies considerably, depending on the flow-sensing device and modulating valve design. Signals from the flow sensor, rate controller, and valve may be pneumatic, electric, mechanical, or a combination of these.

Following a backwash, when dirt head loss is at its lowest, the filter system has the least amount of restriction; if left unadjusted, water will flow at its fastest rate. To control the actual rate to the set-point value, the modulating valve is closed to induce head loss through the valve to restrict the flow back to the set-point rate.

As dirt head loss increases, the flow modulating valve is gradually opened to maintain a constant flow rate leaving the filter. The level in the filter cell may vary over time, and a backwash can be initiated when the actual head loss reaches the available head loss across the filter – if time or filtered turbidity doesn’t dictate the frequency. The point at which actual and available head loss equal one another is indicated when the cell water level reaches the maximum elevation and the modulating valve has moved to its full open position.

An influent flow splitting filter system has an adjustable weir positioned at the entrance of each filter cell. The influent weir is the system’s main component. A feed pipe or flume common to all filter cells carries the water to the individual weirs. The inlet weirs are adjustable so each can be positioned at the same elevation to obtain uniform flow splitting. Ancillary equipment often includes an influent control valve and an effluent hydraulic control point to maintain a minimum water level in a filter cell. The influent control valve is used to stop incoming flow if the cell needs to be removed from service, such as during a backwash event. The effluent hydraulic control point may consist of a downstream weir or upturned loop in the effluent pipe.

As water passes over the influent splitting weir at each cell, an equal amount of water is delivered to each online filter cell. The effluent hydraulic control point is included to prevent surface scouring or dewatering of the filter media. The hydraulic control point is often set a few inches above the resting filter media surface. The flow from the influent weir may be directed through the wash-water collection troughs to minimize media scouring directly after backwash when the dirt head loss and filter cell water level are lowest.

As dirt head loss increases, the cell water level will rise within the cell. Terminal head loss is located at a water elevation below the influent weir to prevent the weir from flooding, which would make it ineffective for flow splitting. 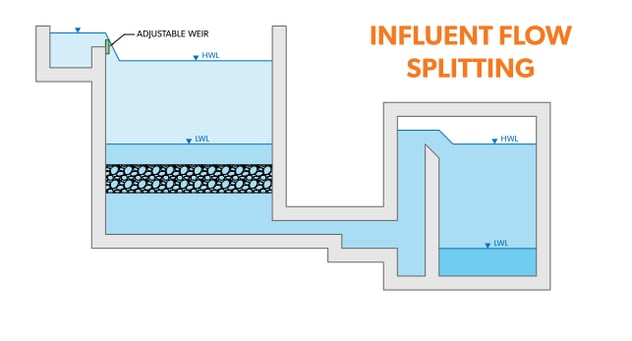 This type of filter control uses a level-sensing device in each filter cell to communicate with a control valve in the effluent line. The communication method can take various forms, including mechanical linkage, pneumatic pressure, electrical signal, or a combination of these. A variety of level-controlling devices may be used. The most common is a butterfly valve equipped with an appropriate actuator to position the valve disc.

Valve size selection is critical for operation, and selection should be made such that a small change in disc position doesn’t drastically change the flow through the valve.

Constant-level control is similar to effluent rate of flow control, as the sensing system compares current conditions with desired set points and works in conjunction with the control valve to align the two conditions. In a constant-level control system, the level-sensing device determines actual water level and compares it with the set point. The comparison method depends on the sensing device, control valve actuator, and communicating controller.

Another common option is to use influent flow control, which is similar to an effluent rate control system except the components are located on the influent side of the filter. 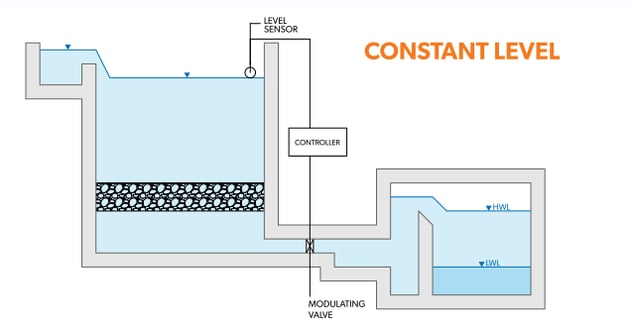 Declining-rate filtration is one of the oldest and simplest methods of filter control. It is used with multiple filter cells – the greater number of cells, the better the performance. The system’s main component is the filter media.

A two-position control valve may also be used where the valve is partially closed directly after a backwash to restrict flow of the cleanest cell.

The easiest way to understand declining rate filtration is to consider the entire filter system rather than a single filter cell. The influent water enters the cell below the cell water level, allowing the water to flow freely into the cells. All filter cells are fluidly connected through the influent system. With the filter influent unrestricted, the water level will be the same in each filter cell. After the initial system startup, the filter cell backwash events are staggered such that each filter cell is in a different state of cleanliness.

Therefore, flow through a cell is based on the dirt head loss in a filter cell, because all cells have the same water level above the media. Thus, the cleanest (most recently backwashed) filter cell will pass more water than the dirtiest cell (closest to backwash).

As dirt head loss increases across the system, the level in the filter cells will increase until the maximum system head loss is reached. Because all cells have the same water level, the filter cell that has been operating the longest is then backwashed.

After the backwash event is completed, the system’s overall dirt head loss is reduced, so the cell water levels will drop and the cycle is repeated.

A flow-restriction device, such as an orifice plate or partially opened valve, is often installed in the effluent line to limit the maximum rate of filtration through a cell. This flow restriction is used to limit the initial flow passing through the filter – essentially a speed limit for the filter.

NOTE: The descriptions provided here are based on a single filter cell in operation and don’t account for upstream or downstream processes and their control systems. In operating a filtration system, it’s important to consider how a filter’s operational control system affects or is affected by control processes throughout the plant.