Nitrogen Pollution From Agriculture Is a Growing Issue for Drinking Water 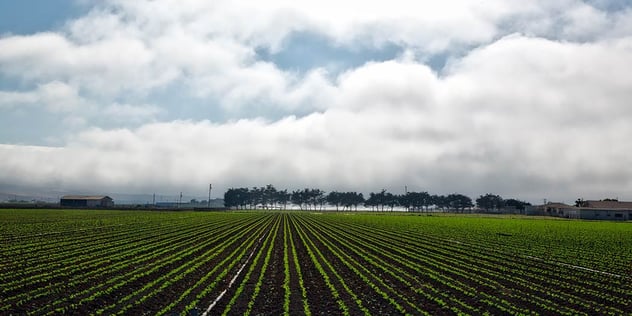 Growing enough food to feed an expanding population places complex demands on the environment, most significantly from agricultural run-off. Nitrate pollution from excess fertilizer application challenges the quality of water sources and can require a nitrate removal solution to make water safe to drink.

Yet, low-cost, synthetic fertilizer is needed to increase crop yields and meet the world’s need for food. Without it, the world cannot produce enough food to sustain the increasing global population that has more than doubled in the past 50 years.

In the extensive use of fertilizer since the 1950s, more of it is applied than crops can absorb. Nitrogen, a key component in fertilizer, is water soluble, and irrigation washes the excess nitrates into the groundwater.

Worldwide, more than 80 percent of fertilizer used for agriculture, plant, and animal production is lost to the environment. Agriculture is becoming less efficient at using nitrogen, and a larger proportion than ever is entering surface water and groundwater sources.

This excess nitrogen causes an overload of nitrate in the groundwater tapped for drinking, causing a number of proven health concerns. There is a growing awareness of the importance of nitrate removal in maintaining healthy drinking water. Globally, more than a third of water withdrawn for public supply for cities and towns comes from groundwater that can be affected by nitrate contamination.

Nitrogen pollution is a largely ignored environmental story, with no international agreement or UN agency to bring visibility to it. While our global population has become more efficient at using the world’s natural resources, our use of fertilizer does not follow that trend.

The International Nitrogen Management System, a five-year, $60-million research project from the UN Environment Programme and the Global Environment Facility, met in early 2018 at New York University. One significant conclusion is that we must halve the amount of nitrogen we deposit into the environment by mid-century or our ecosystems, including drinking water, will be at risk. To do that will require, among other things, almost doubling the efficiency of nitrogen use on the world’s farms.

The nitrogen use efficiency (NUE) – defined as how well crops take up N from the soil combined with how well they use the absorbed N to create yield – has actually improved slightly in the United States.

The NUE for farms in the rest of the world, however, has declined from more than 50 percent in 1961 to about 42 percent today, according to Xin Zhang, an environmental scientist at the University of Maryland. The sharp decrease in China, in particular, can be traced to inexpensive fertilizer prices.

World fertilizer production has grown tenfold from 1961 to 2014. Two thirds of nitrogen pollution in the U.S. is caused by agriculture runoff, generated by unused nitrogen from fertilizer.

Contamination Affects Health at Much Lower Levels Than Previously Believed

High levels of nitrate contamination in drinking water has long been seen as responsible for methemoglobinemia or "blue baby syndrome,” a risk of particular significance to infants, pregnant mothers, and the elderly.

In addition, while long suspected as increasing the risk of cancer, results of a recent study in Denmark clarify that nitrate in groundwater causes an increased risk of colon and rectal cancer, at concentrations below those that are accepted as current drinking water standards. The highest concentrations are mainly seen in small private water supplies.

In the Denmark study, published this year in the Journal of Cancer, researchers followed 2.7 million Danes from 1978 to 2011 and tested 200,000 drinking water samples.

The study found that people who were exposed to the highest concentration of nitrate in drinking water had a 15 percent greater risk of getting colorectal cancer compared to those who had the least exposure. The increased risks of cancer could already be seen at 4 mg/L, which is well below the MCL set by the EPA of nitrate as nitrogen (NO3-N) at 10 mg/L.

According to Professor Torben Sigsgaard from the Department of Public Health at Aarhus University, who was involved in the research project, the study’s conclusions mimic several international studies. These studies say that the drinking water standard ought to be lower to protect against not only methaemoglobinaemia, which is the most common nitrate contamination concern, but also against chronic effects of nitrate contamination, such as cancer.

The safety of drinking water in the U.S. is controlled through the Clean Water Act. Each contaminant source discussed in the Act is handled differently, and agriculture is the most lightly regulated. For farming communities, this makes the challenges of nitrate pollution even more significant.

California’s efforts towards nitrate removal in drinking water began nearly a decade ago. The State first worked with growers to reduce new pollution and then addressed the pollution already present in the soil and water. Cleaning up the extensive aquifer will take a large amount of resources, and results will not be seen for decades.

The University of California, Davis, completed a study in 2012 that analyzed the impacts of drinking water nitrate on communities in California. It included a five-county area of central California, one of the top ten agricultural areas of the country. In commissioning the study, “Addressing Nitrate in California’s Drinking Water,” the state of California has taken steps to better understand the nitrate problem in its own state and propose solutions.

The U.C. Davis study estimated that up to 250,000 people using 10,000 private or small local system wells are at high risk of excessive exposure to nitrates in the San Joaquin and Salinas valleys.

In the Salinas Valley in Monterey County, an enforcement order for larger farms requires the growers to provide clean water to affected residents. For most of the residents who are drawing their water from contaminated wells, the short-term solution is bottled water.

But bottled water is only a stopgap and a hardship for many elderly, disabled, or low-income people who live and work in these rural communities. There are a few possibilities for longer term solutions:

Also, nitrate contamination is more prevalent in areas where local soil and geological conditions make it easier for nitrate to leach into the groundwater. Over 200,000 wells in California alone are suspected of being contaminated with nitrate.

While addressing the long-term problems of nitrate pollution in agricultural runoff, short-term solutions are also needed to preserve the present-day health of communities and their residents. Our use of synthetic fertilizer may be effective for food production, but it will continue to be harmful for public health unless a treatment plan for the accompanying nitrate contamination is established.