The advantages of paste thickeners in tailings circuits have been well-established for most minerals. The type of paste thickener underflow generally used for surface stacking of tailings is called “thickened tailings.” Thickened tailings are a suspension of solids which are relatively non-settling and non-segregating and which have a higher concentration and viscosity than that of conventional tailings.

Common applications include a thickener with underflow pumps that are typically centrifugal and transfer pumps that can be either centrifugal or positive displacement.

Increased water recovery is important to many countries throughout the world due to the scarcity of fresh water. The more water that can be recovered from a tailing stream and, in turn, used again upstream in the plant reduces the amount of fresh water a mine needs. The cost of water is frequently one of the primary drivers for implementing a thickened or paste tailings disposal system.

Surface stacking is the disposal of tailings on the surface of the ground. As a non-settling, non-segregating suspension of solids, minimal water is released into the impoundment and the stacked tailings dries significantly faster than conventional ponds where fines (slimes) segregate and can seal the surface of the deposit, preventing drying.

Stacking as a method of tailings disposal offers significant advantages over ponding. These advantages include: smaller impoundment area, less water in the pond, improved water or chemical recovery, a lower risk of containment breach, less groundwater contamination, and easier final reclamation of the site.

When tailings ponds reach their capacities, the construction of a new dam is usually the solution for the deposition problem. This solution is very expensive and is not always an option if there are environmental, licensing and space constraints.

By utilizing a paste thickener, the thickened tailings stream is deposited into the existing pond, increasing the life of the impoundment. The existing free water in the pond will be displaced and available for recovery and the higher concentration and drying properties of the paste will take up less space, extending the life of the pond.

Molybdenum (moly) is often produced as a byproduct of copper mining. Copper is used for electronics, construction, and metal alloys. Moly is mostly used to make metal alloys, and as a catalyst.

As markets need copper and moly, their ores are separated, concentrated, and sold separately. This separation and concentration of copper and moly is called the “copper-moly flotation circuit.”

Copper and moly are often found together as sulfides*†. Sulfides in solution will float or sink with the right combination of chemicals and gas bubbles (froth flotation).

These sulfide ores are separated from gangue (waste) material, then from each other, by froth flotation.

Grinding mills liberate the ore from the gangue material (non-ores: silica, organics), and reduce it to an optimal size for flotation. Water mixes in to form slurry. This helps both in the transportation and separation of the solids.

Both the copper and moly sulfide ores together (bulk) float in rougher flotation cells, then cleaner column cells, and often scavenger cells. These groups of flotation cells work together to give a high total yield of the bulk ore, which is sent on to be thickened.

The underflow gangue (waste) from the rougher and scavenger cells flows to a tailings thickener to recover water for the process. Filters dewater these tails further, or a tailings pond stores them.

A high-rate thickener dewaters the bulk of copper-moly concentrate before more separation.

The moly flotation circuit has similar groups of flotation cells with chemicals to float the molybdenite (moly concentrate), and settle out the copper sulfides (copper concentrate).

*Moly is found as Molybdenite (MoS2), and copper is in various combinations with sulfur (eg. Chalcocite (Cu2S)).
†If copper is found as an oxide, it is not as easy to float. It is typically heap leached with sulfuric acid (dissolved), then removed from solution and concentrated by solvent extraction (SX) and electrowinning (EW).

From the rod mill the material proceeds to the cobber magnetic separators. Any non-magnetic material which has been released by the rod mill is separated and sent to the tailings thickener. Magnetite iron ore particles are separated by the magnetite separator from the gangue (waste material) minerals in the cobber magnetic separators. This material flows to the ball mill for further size reduction.

Material from the ball mill flows to the cleaner magnetic separators. Again non-magnetic material which has been released by the size reduction process is sent to the tailings thickener. The magnetic component is pumped to hydrocyclones for sizing.

The desliming prepares the ore for flotation, discarding the ultrafine particles. The underflow from the desliming thickener is sent to a series of finisher magnetic separators to further purify the solution. The overflow from this thickener reports to the tailings thickener.

The separated magnetic material from the finisher separators is sent to reverse flotation cells for further separation. The flotation phases employ conventional large-size mechanical cells, in addition to flotation columns. This process uses starch (depressant) and amine (quartz collector) as reagents to promote the separation of the contaminant mineral (quartz) from the iron-bearing mineral.

In the concentrate thickener, the purified slurry is thickened prior to being pumped to a disc filter. Again the addition of polymer aids in the separation and thickening process. The disc filter uses vacuum to dewater the magnetite iron ore concentrate and discharges a relatively dry cake which is sent for pelletizing. This process allows ore of very low magnetite content to be processed into a high quality product.

Oil sands, tar sands or, more technically, bituminous sands, are a type of unconventional petroleum deposit. Oil and tar sands represent a vast wealth of energy reserves for the world rivaling traditional sources in quality, availability and the ability to meet the world's needs for many years into the future. The technologies for extraction of this resource are increasingly efficient, and WesTech has worked with several companies on the leading edge of these efforts and is a ready partner for new projects and plant upgrades.

The term “oil sands” is actually a bit of a misnomer. The deposits are saturated with a tarlike substance known as bitumen. A great deal of processing is required to separate this bitumen from the associated soil and other debris. One of the two most common ways to recover bitumen from oilsands is through open pit mining of deposits which lie near the surface. Oil sands deposits which lie within 75 meters of the surface are typically recovered via mining. This process is much the same as strip mining for coal or any other mineral.

Mining shovels remove the oil sand and load it into large mining trucks. These trucks carry the oil sands to mobile crushers. The crushed material is stockpiled for the next step.

The oil sands broken up in these crushers are then fed to rotary breakers with the addition of hot water to remove rocks and other debris. The resulting slurry is pumped through a pipeline and chemicals are added as required. The slurry reports to a primary separator where it is classified into three distinct cuts – the overflow, the middle means, and the underflow.

The overflow from the primary separator is sent for processing via steam heating of the bitumen. Bitumen is deficient in hydrogen. Bitumen must be upgraded to synthetic crude oil specification in order to be an acceptable feedstock for refineries. This is done by the addition of hydrogen or the rejection of carbon, or both. Upgrading uses natural gas as a source of heat and steam for processing and also as a source of hydrogen. Other hydrocarbons such as naphtha may also be used for upgrading.

The overflow of the tailings thickener is water which is recovered for recycling back into the circuit. This is not solely due to restrictions on water usage. It is therefore critical that treatment processes involving water recovery in reuse are employed in this application. The combination of tailings thickener(s) and vacuum dewatering equipment results in maximum water recovery. 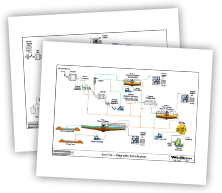