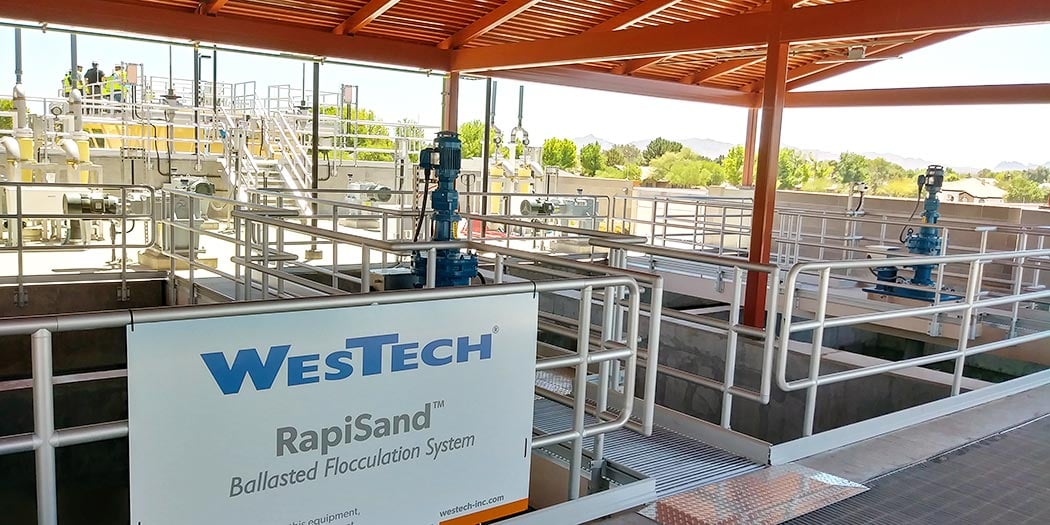 Big news: The Santan Vista Water Treatment Plant’s phase II expansion has been selected as Water Treatment Plant Project of the Year by the Arizona Water Association. The plant’s expansion, which doubled its capacity from 24 MGD to 48 MGD, came online this spring, serving the fast-growing communities of Gilbert and Chandler, Arizona.

The project was a planned second phase of construction for the plant, originally commissioned in 2009 to treat drinking water from the Central Arizona Project’s Colorado River watershed.

The Arizona Water Association selected Santan Vista for its success and efficiency in doubling the plant’s water capacity on time and below budget. In fact, the project saved approximately $15 million in program costs compared with the original estimate, a 20% cost reduction.

WesTech’s primary role in the phase II project was providing the company’s proprietary RapiSand™ ballasted flocculation system for water clarification. As a source for quality drinking water, the Colorado River requires the removal of organic carbon and suspended solids.

As originally constructed in phase I, the Santan Vista WTP included two ballasted flocculation clarification trains, each with a capacity of 12 MGD, for a total of 24 MGD. These had been supplied by a competitor; however, when it came time for expansion, the plant’s designers and engineers chose to open the competition to other equipment suppliers, and ultimately selected WesTech’s RapiSand.

It’s all about how much water they can put through a given footprint, and the upside of these technologies comes when there’s a need for expansion with limited real estate, says WesTech Applications Engineer Shawn Sturgeon. They were happy with the operation of the two existing ballasted flocculation trains, so what we provided was identical in operation, but at a better price and with extensive guarantees.

Ballasted flocculation is a high-rate, physical-chemical clarification process involving the fixing of flocs, or suspended solids, onto microsand ballast with the aid of a polymer. Due to the large number of particles, the microsand provides a larger contact area for binding and the coagulated solids form a dense, ballasted floc.

The RapiSand system from WesTech uses rapid mixing and multi-stage flocculation, in combination with enhanced settlers to increase sedimentation velocities by a near factor of 10. RapiSand’s extremely fast sedimentation process has a wide variety of applications and uses in the removal of suspended solids.

WesTech unveiled the RapiSand ballasted flocculation system in 2009, just after completion of phase I of Santan Vista. The plant’s designer, engineers, and construction firm, who during phase I had just one ballasted flocculation product to choose from, were happy this time around to have more than one option.

In addition to the comparative quality of WesTech’s RapiSand system at a lower cost than the competitor’s, WesTech also provided a full-spectrum extended warranty and ongoing maintenance.

We told them that if something didn’t work right, we’d fix it, no questions asked, so it was very minimal risk for them to choose WesTech over the competition, while incurring significant savings of one to two million dollars, says Sturgeon.

We feel very confident in our product, that’s definitely what we want people to pull out of this experience. We felt a strong likelihood that RapiSand would function well in this situation and we were ready to stand behind that. 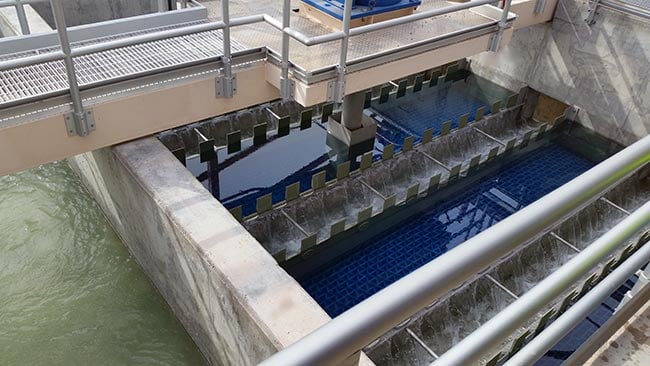 WesTech also stood out for the company’s ability to provide in-house electrical expertise. WesTech engineers conducted a complete evaluation and upgrade of the existing control panels and programming as well as an expansion and modernization of the system to handle the plant’s doubled capacity.

This is a big plus of working with WesTech, that we have the expertise to do that all in house, and don’t have to subcontract with anyone, says Sturgeon. The new control panels include remote operation and seamless communication between all components in the system, both existing and new.

Our controls and programming group made all the physical hardware, made sure it could do what it needed to do, and programmed it so the plant would not even see a difference between what they had been doing and what they were going to do in the future, says Sturgeon. When the plant fired back up, they pressed the button, and everything worked exactly how it had worked before.

Thanks to the success of the Santan Vista phase II project, WesTech is receiving a great deal of interest in RapiSand and inquiries about future project potential.

The market has a lot of activity right now, both in the municipal market and industrial markets, says Sturgeon. This is a very high profile installation, and the fact that it’s running side by side with our competition’s equipment makes it especially valuable. Customers can tour the plant, kick the tires, and see if they see any differences between the two.

In addition to municipal applications, RapiSand has extensive applications in the industrial sphere. We’ve received inquiries from paper mills, agricultural applications, agribusiness, and more, says Sturgeon. There are lots of processes in which they have to clean water for re-use or for discharge.

And as the government tightens regulations on power plant emissions, for example, RapiSand is an attractive option, in particular for its ability to clean up mercury.

Those are ever-tightening limits, and rightly so, which means power plants have to mitigate what’s going into the air or into the water, says Sturgeon. It’s fun to be part of the technology that can go in and make those things happen.

A facility might also use a mobile unit when they’re starting up a new section of operation that’s going to generate its own stream of water that needs to be treated. This gives them the time they need to develop a permanent solution, says Sturgeon.

WesTech currently has two 500-gpm mobile RapiSand units in operation, with more on the way.

By the end of this year, we’ll have an additional, 20,000-gallon capacity residing in eight different units in various stages of production, says Sturgeon. There are a lot of areas of expansion for this process. There’s a lot it can do.

Interested in working with WesTech on similar projects? Please use the Contact Us form to submit your request.