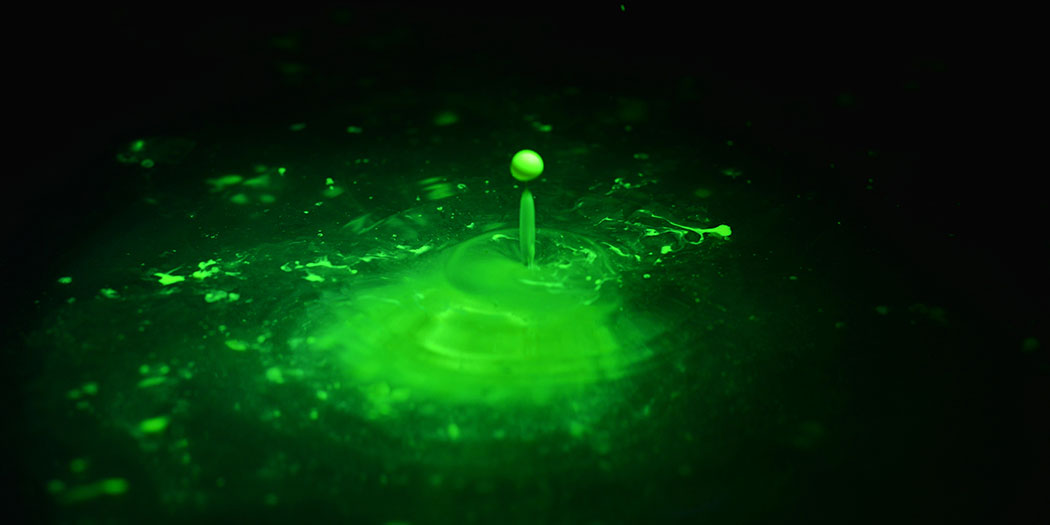 Two common radionuclides that do, uranium and radium (an element in uranium’s decay chain), occur naturally in soil and rocks throughout the world. For example, Australia is home to approximately 30 percent of the world’s known recoverable uranium reserves and Russia is home to about 9 percent. The concentrations at which radionuclides occur determine their concentrations in water. Generally speaking, concentrations of radionuclide contaminants are greater in groundwater than in surface water, and greater in waters from deep wells than in waters from shallow wells.

In drinking water, radionuclides cause cancer and many other health issues, including kidney damage and birth defects. As a result, the U.S. Environmental Protection Agency (EPA) has listed maximum contaminant levels (MCLs) for common radionuclide sources. (See the following table.)

According to U.S. Geological Survey files, over half of the country’s 48 contiguous states are known to have high levels of radionuclide groundwater contamination.

Generalized Areas of The U.S. Known to Have High Concentrations of Naturally Occurring Radionuclides in Fresh Groundwater. (Sources: 1985, Brutsaert and others; 1981, USGS and others)

As the preceding figure illustrates, radon, a daughter in radium’s decay chain, can also make its way into drinking water. However, the National Research Council and National Academies of Sciences, Engineering, and Medicine have determined that radon in water poses a less significant threat to most water consumers than the threats associated with radon gas in indoor air.

Water treatment plants (WTPs) with source waters that exceed EPA guidelines for radionuclides can chose from a variety of treatment methods, including, but not limited to:

Technically a non-treatment method, blending entails diluting radionuclide-containing waters with water sources that do not contain radionuclides. According to EPA materials, facilities that opt for this method should ensure that waters from all sources are thoroughly mixed before releasing them to downstream customers. For safety, the ratio of contaminated waters to waters with no or very low contamination should be set to produce contaminant levels that fall well below the EPA’s MCLs.

EPA materials indicate that this radionuclide treatment can remove up to 99 percent of the beta, alpha, radium, and uranium contaminants that are suspended in water by passing the water through cation (positively) or anion (negatively) charged resin media that binds the contaminants. Exchange resins for Ra 226 and Ra 228 often use sodium and potassium, which also remove hardness elements such as iron, calcium, magnesium, and manganese. According to EPA materials, this method may therefore seem appealing to facilities that must address water hardness in addition to radionuclide contamination.

Although the EPA has identified ion exchange as a best-available technology (BAT) and Small System Compliance Technology (SSCT) for radionuclide treatment, several factors can limit its effectiveness. For example, hardness ions can compete with radium ions, which can affect the cation-exchange capacity (CEC) of the resin media. In addition, according to EPA materials, high levels of magnesium and iron in source waters can clog resin media.

Equipment used for lime softening can also remove iron, manganese, and magnesium in the same process step that removes radium and uranium. Given the right conditions, it can also remove arsenic.

EPA materials suggest that because lime softening removes hardness and alkalinity, treatment plants may need to consider adding chemicals that inhibit pipe and equipment corrosion to the finished water.

According to EPA materials, this BAT and SSCT process can remove up to 99 percent of most radionuclide contaminants, including all of the radionuclides listed in the EPA’s table. Reverse osmosis (RO) technology uses semi-permeable membranes to remove dissolved contaminants from water, such as total dissolved solids (TDS), chlorides, and hardness. The basic principle of RO involves applying high pressure to counteract natural osmotic pressure to drive water from a more concentrated feed solution to a pure water permeate. Dissolved impurities are removed during this process.

Diagram of a Reverse Osmosis Process with Ultrafiltration

Pretreatment, such as ultrafiltration, is often applicable for water sources that contain suspended solids, metal oxides, and colloidal deposits because these constituents can foul reverse osmosis membranes.

WesTech provides RO systems that can be designed to meet a variety of unique requirements, including radium treatment. These systems integrate with pre- and post-radium removal equipment.

HMO filtration is an EPA-recognized SSCT radium treatment method that introduces a mixture of potassium permanganate (KMn04) and manganous sulfate (MnS04) into the influent stream prior to filtration. (KMn04 and MnS04 combine to create HMO, a compound that adsorbs radium.)

Facilities have two options for introducing HMO into their influent streams: They can inject KMn04 and MnS04 separately, or they can blend KMn04 and MnS04 into a slurry and then inject the slurry. The latter option usually requires three tanks: one for dissolving MnS04, one for blending the dissolved MnS04 with the KMn04, and a day tank from which the slurry is injected into the unfiltered influent.

EPA materials indicate that both options can remove up to 90 percent of Ra 226 and Ra 228. Because high iron levels can compete with radium ions in HMO filtration, some facilities may need to remove excess iron before applying HMO treatment.

According to EPA materials, communities that use groundwater are often already filtering source waters to remove iron and manganese. Adding an HMO process to their existing treatment trains can allow them to treat radionuclide contamination while using their existing equipment.

Learn more about removing iron and manganese from groundwater.

An Example of HMO Filtration in a Georgia Treatment Facility

The City of Lawrenceville lies in the heart of Georgia’s Gwinnet County. Dating from its first public well in 1821, the City has had a tradition of using groundwater from wells to meet its citizens’ need for drinking water. It currently draws 500,000 gallons per day (MGD) of groundwater from seven actively producing wells to help deliver the 2 MGD of safe, clean drinking water its citizens need. It purchases the remaining 1.5 MGD from Gwinnet County, which sources its water from Lake Lanier.

The City’s long-term goal is to produce more than half of the water its customers demand, thus reducing its dependence on County water. With this goal in mind, the City put out a bid for a new water treatment facility with the capacity to treat water from up to eight groundwater wells, starting with five recently-dug wells. Two of the five wells had levels of Ra 226 and Ra 228 that, combined, measured 14.0 pCi/L – a little less than three times the EPA’s MCL.

Secondary elements that required treatment were iron (1.0 mg/L) and manganese (0.5 mg/L). The secondary MCLs (SMCLs) for iron and manganese are 0.3 mg/L and 0.05 mg/L, respectively.

The winning solution would need to treat the City’s groundwater for all of these contaminants.

The AERALATER Unit at Lawrenceville, Georgia

The engineering firm that won the bid selected the AERALATER® Type II packaged treatment plant from WesTech, which combines three processes in a single unit – aeration, detention, and filtration. The system is known for its ability to remove common contaminants from groundwater, including iron and manganese. It also works well with HMO processes to remove radionuclides.

The HMO process precedes the processes for iron and manganese removal. KMn04 and MnS04 are separately fed into the influent upstream of the AERALATER unit. A static mixer blends the two chemicals to form an HMO slurry. Dilution water carries the slurry to the AERALATER’s filtration zone, just above the filter, where it adsorbs Ra 226 and Ra 228 prior to filtration. 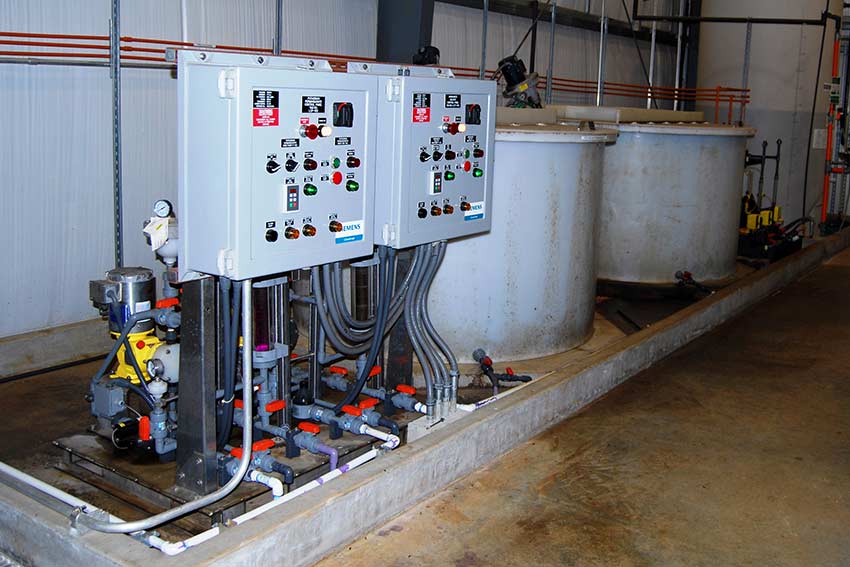 As for the iron and manganese, the unit includes an induced draft aerator to saturate the influent with oxygen. This oxidizes the soluble iron, converting it to insoluble iron that will then precipitate into the system’s detention tank. To treat the influent’s manganese component, the City injects KMn04 just below the aerator, which precipitates the manganese to the detention tank.

The system’s filters remove the precipitated iron and manganese as well as the adsorbed radionuclides. Filter backwashing removes the contaminants from the filter media at intervals that are controlled by head-loss measurements, keeping the filter media clean and sending contaminants through a backwash waste valve to waste.

The AERALATER II system has been in operation since 2011. At startup, the facility was using both contaminated wells. Recent drought conditions raised concerns about the radionuclide concentrations in one of them, so the City opted to take it offline. Using source water from the remaining contaminated well, the influent level of combined Ra 226 and Ra 228 is approximately 2.8 pCi/L. The City’s HMO system dependably reduces radionuclides by about 42.9 percent, yielding an effluent that contains 1.6 pCi/L. The system treats iron levels to <0.3 mg/L and manganese levels to <0.05 mg/L.

According to the Environmental Working Group (EWG) Tap Water Database, more than 22,000 utilities in all 50 U.S. states have reported detectable levels of radium in their source waters. While not all of these waters require treatment, this statistic suggests that many utilities are facing, and will continue to face, the need to treat drinking-water supplies for radionuclide contaminants.