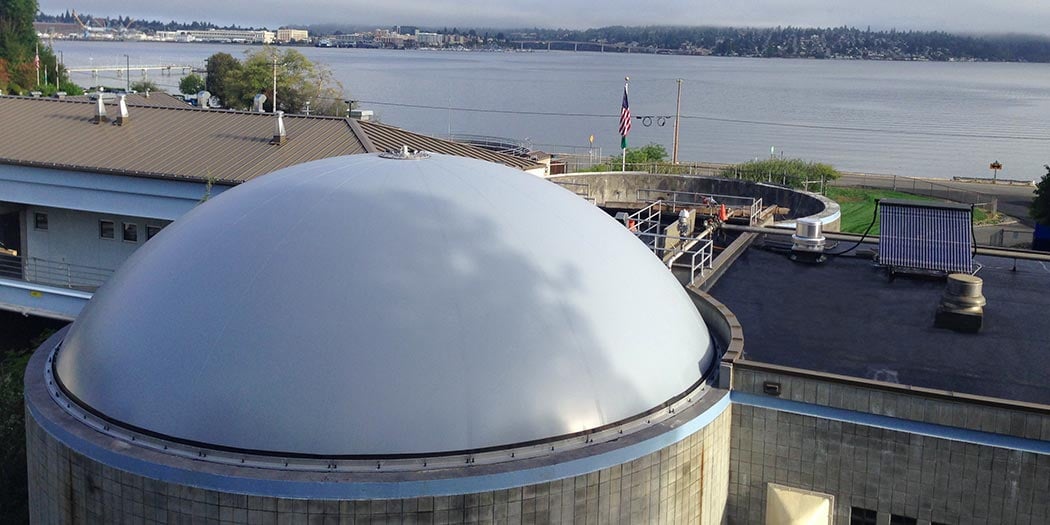 Anaerobic Digestion has played a key part in turning wastewater treatment plants (WWTPs) into water resource recovery facilities (WRRFs). The byproduct traditionally called “waste gas” is used as biogas - a renewable, clean, green energy source. Some facilities have been able to generate enough to put renewable natural gas (RNG) into a pipeline and/or send power back to the grid.

While innovation has improved in some areas, the basic configuration of anaerobic digesters for wastewater has remained about the same since the early 1900s.

It doesn’t take much to start the anaerobic digestion process within a tank with some primary and secondary sludge. The incoming microbes just need an oxygen-free, homogenous, warm environment and about 15-20 days to thrive, break down solids, and produce biogas. For this to happen, the tank needs to be COVERED, MIXED, and HEATED.

Selecting the right type of digester cover, mixer, and heating system, and then using the equipment effectively, reduces the chances of inefficiencies, process challenges, and catastrophic failures.

Cover Me: Biogas Storage, Containment, or Both?

At first glance, a digester cover may appear simple – a structure that sits on (or in) a tank to keep the biogas in and the oxygen out. Unlike many of the other domes at a WRRF, these steel or membrane structures are gastight and under pressure. Some designs provide storage of the biogas that can be utilized as renewable energy.

Steel covers typically operate between 8-12 inches of water column, which is just under ½ PSI. That may not seem like much, but the resulting force at this scale is enough to float a steel cover that weighs hundreds of thousands of pounds. Floating steel covers are ballasted with concrete blocks to operate at these typical pressures. Steel cover designs include fixed, gasholder, or buoyant.

Dual membrane gasholder digester covers use high-strength, PVC-coated fabrics and inflation fans to maintain the outer membrane structure and pressurize the biogas. This technology can also be used for standalone biogas storage, separate from the digester.

What type of digester cover is best?

Many factors go into this decision, and each plant or project has unique drivers that affect that answer. Historically, primary digesters were mixed, heated, kept at a constant volume, and used a fixed steel cover. Secondary digesters were not mixed or heated and used buoyant or gasholder covers to accommodate liquid level variations from biosolids dewatering and/or hauling.

Conventional definitions often get blurred as facilities upgrade or change operations. Many secondary digester tanks have been retrofitted to be heated and mixed to improve biogas yield and solids destruction. Primary or secondary designations cannot be effectively used to advise equipment selection.

There are several key things to consider when selecting a digester cover.

Below is a chart that compares these factors with the type of cover and helps narrow down the options. A more detailed evaluation would make sense for a specific project.

Mix It Up: Choose the Best Digester Mixer

Selecting the proper mixer is largely based upon experience and widely accepted rules of thumb for digester mixer design. However, advanced tools like computational fluid dynamics (CFD) struggle to effectively model the complex interactions of solids, grit, liquids, and gas that make up digester sludge.

Game-changers, like thermal hydrolysis processes (THP, aka sludge pressure-cookers) that change the digester sludge rheology and increase gas production, suggest more thought should be given to mixing performance and the limitations with various options.

Guard against bubbling over, a common digester issue.

Fly over a few wastewater treatment plant digesters (or use Google Maps) and you are likely to find several floating covers with a ring of sludge or foam around the perimeter of the cover. Researchers traditionally attributed this to foaming events, resulting from over-feeding, over-mixing, or filamentous bacteria, but recent studies suggest that some foaming issues are due to rapid volume expansion (RVE).

This phenomenon occurs when bubbles of biogas get held up within the matrix of liquids and solids in a digester. RVE can cause the overall specific gravity of the sludge to drop and the volume of the digester contents to increase suddenly, overwhelming the overflows, spewing up around the cover, and sometimes causing spills.

Published studies suggest that one source of this problem is an increase in sludge viscosity due to inadequate (not excessive) mixing or a sudden mixer shutdown (Chapman and Krugel, 2011). Other research has shown that some poorly mixed digesters actually have specific gravity (SG) that varies with sludge depth and can be as low as 0.6 (Willis et al., 2016) near the digester sludge surface. One significant side effect would be that covers designed to float on water (SG=1) would partially sink into this low-density sludge creating the signature Google Maps “sludge ring” described previously.

Selecting the right mixer will improve overall digester performance, be reliable, prevent foam, grit and RVE issues, and ensure that the tank is sufficiently mixed from top to bottom. There are several types of mixers to consider.

Draft tube mixers are essentially high-flow, low head, axial-flow pumps designed specifically for digesters. They are reversible so they can pump up or down and can be mounted through the cover or through the side of the digester tank. Flows range from 5,000 to 25,000+ gpm, and the standard tank turnover time is 20-30 minutes but can be adjustable via variable frequency drives.

Decades ago, these mixers utilized bronze bushings and inferior bearings and seals that created reliability issues. Current designs are guaranteed for five years and frequently run for 10 years before bearings and seals require replacement. This can be completed onsite and the mixer can be reinstalled and operational within a few hours.

Pump and nozzle or jet mixing is a simple approach that is best suited for extremely variable-level digesters (or holding tanks). Nozzles on the floor spin the contents of the tank very effectively but have little ability to submerge floating scum or low-density sludge near the surface. Foambuster nozzles can be added to the surface to help address this.

CFD models are commonly used for these systems since the relative flow (usually less than 1,000 gpm) is much lower than other designs and mixing effectiveness is very dependent on nozzle placement.

These systems rely on larger horsepower pumps than most other mixer types. This type of mixing on a waste-to-energy system can negate the benefit of additional biogas produced in a well-mixed digester. Intermittent mixing by shutting the pumps off can save energy, but it can exacerbate the RVE issues described earlier.

Linear motion mixers (LMMs) are a relatively new mixing approach that has gained attention as a non-rotational, low-energy alternative. Some studies have shown that digesters can produce gas and operate well (in the short term) with no mixing (Dineen et al. 2015).

However too little mixing may cause long-term problems, including process instability, grit settling, scum flotation, and other factors that inhibit the long-term effectiveness and reduce the active volume of the digester. Minimizing energy usage is very tempting but may significantly reduce the effectiveness of the mixer.

The LMM’s oscillating disc imparts a gentle flow, and the energy added is not significant or near enough to the surface or the floor to reduce scum or grit accumulation. Since this is not a pump, mixing flow cannot be measured, so there is no way to calculate tank turnover. In this case, WEF MOP 8 suggests calculating velocity gradient or energy per unit volume to compare mixer designs, but this design typically falls below the recommended ranges. (WEF, 2019)

Various types of gas mixing systems have been tried, mostly to mitigate the historic challenges of having moving parts in the sludge. Confined (in a draft tube) or unconfined lance designs inject bubbles from the top but have a tendency to collect rags and debris.

The “bubble gun” (gas injected into a draft tube) method can be effective on digesters with a constant liquid level. However, some of the bubble generators have had ragging or clogging issues. Overall, the challenges with maintaining and running a compressor operating with moist, corrosive, and explosive biogas can be a nuisance and a major safety concern.

Effective heating, mixing, and feeding regimes can play a role in maintaining optimal process conditions. Mesophilic digesters operate around 95 degrees Fahrenheit (35 degrees Celsius). This temperature setpoint can vary slightly, but any quick changes in temperature can disrupt the biology within the digester.

Anaerobic digestion is a slightly exothermic process. Unlike some aerobic processes, like composting or autothermal aerobic digestion (ATAD), not enough heat is generated to self-heat and maintain required temperatures. Most anaerobic digesters use heat exchangers (HXs) that transfer heat from hot water to sludge without mixing the liquids. The water is heated with a boiler or combined heat and power (CHP) engine. The latter, also known as cogeneration (cogen), generates renewable electrical power from biogas.

Raw sludge is fed (as steadily and consistently as possible) directly into the digester, and heat is added by circulating the tank contents through a heat exchanger. Feeding the digester through a HX is not usually advised because designing for this excessive short-term demand would require a significantly larger HX. The cold, undigested sludge is also more likely to foul the heat exchanger or cause other flow issues.

Tube-in-tube heat exchangers are commonly used because of their simplicity and robust performance. Sludge is pumped through 4-inch or 6-inch pipes mounted inside larger diameter pipes flowing hot water (typically 150 F/65 C) in the opposite direction (countercurrent). Flow and temperature must be considered to prevent the sludge from getting too hot, which can inhibit the biology or “bake” sludge into the walls of the tube.

Heat exchanger jackets can be mounted on draft tube mixers to gently transfer heat. These are very efficient overall by letting the mixing flow move the sludge, thus eliminating the need for a sludge recirculation pump, piping, and space in a building required by other designs. Also, since the sludge passes through the HX very quickly, the microbes are less likely to be inhibited by excessive temperatures.

Spiral heat exchangers use coiled-up steel plates to transfer heat between alternating gaps containing hot water and sludge. The smaller, 1-inch gap between the plates creates increased headloss and is more prone to clogging than other choices. This design provides more heat transfer in a smaller footprint than the tube-in-tube option.

Many factors should be considered in properly choosing equipment and operating a digester. Whether you are involved in an extensive biogas-to-energy upgrade, biosolids management project, or simply need to replace an old cover, understanding the equipment will help achieve project-specific goals, address operational needs, and keep your digesters operating properly in the long run.