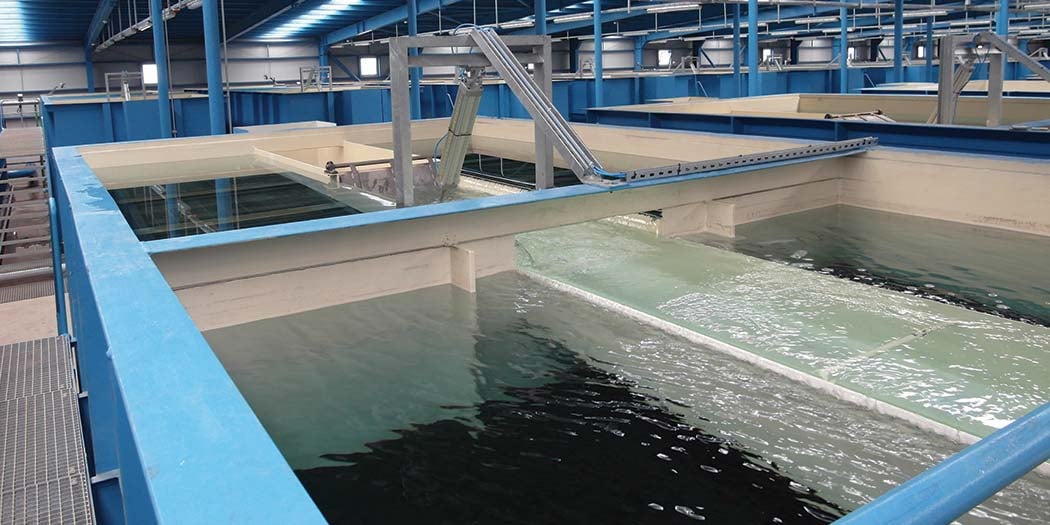 A large percentage of package water treatment plants today operate using obsolete or inefficient backwash methods. These methods can be improved upon by monitoring basic parameters to initiate a clarifier flush and a filter backwash based upon set-time intervals, headloss across the media, and effluent turbidity.

To save time and money, the water treatment plant must rely upon instrumentation that accurately monitors these parameters while producing high quality effluent, minimizing waste, and optimizing net production.

A common package plant configuration is a clarification step followed by a filtration step. Chemicals such as a coagulant and one or more polymers are used to make contaminants insoluble so that they can be captured in the clarifier or filter. Basic instrumentation includes devices such as influent and effluent turbidimeters, differential pressure transducers, or switches and gauges. 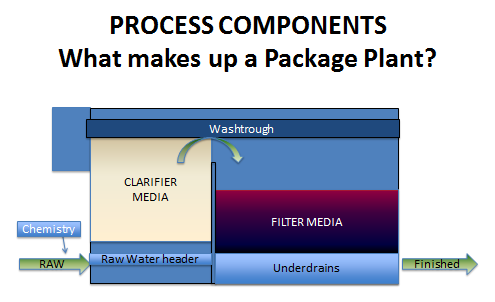 The Cost of Unexamined Set-Times

Many plants initiate clarifier flush and filter backwash based upon a set-time. Typically this set-time is measured in minutes or hours by the PLC program. This method works well when water quality stays consistent or if it is fairly stable – such as ground water or ground water under the influence – or when the flush, backwash, and downtime occur while the demand is low.

However, surface water can be variable and influenced by seasonal changes, run off, or rain events that affect raw water turbidity. Increases in raw water turbidity increases solids loading and can shorten clarifier and filter run times. Initiating clarifier flush and filter backwash based on a set-time can be costly. More flushes and backwashes create more waste and fill the waste storage basins or lagoons too frequently. Time spent cleaning them is lost time and may even prevent the plant from producing usable water.

If the clarifier flushes too infrequently, excessive solids collect in the clarifier and spill over onto the filter. The filter then develops an increase in headloss. This is called breakthrough and causes the process to operate inefficiently. Breakthrough occurs when the solids holding capacity of the clarifier media or filter media is exceeded and solids pass through the media.

In some cases, excessive headloss developed in clarifiers can damage the equipment and create unnecessary downtime and expense for repairs. And with the filter there is the risk that effluent water quality could be impaired.

There are a number of parameters that can be monitored to show how well the process is working and help to optimize the overall package plant.

Most of the parameters cited are commonly recorded either on a log sheet or continuously monitored through a plant SCADA system. Inter-stage turbidity can be obtained as a grab sample when necessary. Even without a SCADA monitoring system, manual logs can be just effective.

A table like the one shown here can be used to collect the data for optimizing clarifier and filter performance.

The parameters for the clarifier and filter are shown as column headings. The time at which the data is taken is shown on the left.

The time interval can be more frequent, such as each half hour, to provide better resolution. The intent is to compile and plot the data in enough detail that trending can be seen. Data collection that is too coarse may not show the same picture of headloss and turbidity spiking as a data set that has more points collected. This is especially evident near the time which the clarifier flushes or filter backwashes. Frequent sampling would be more reflective of the actual events occurring prior to the backwash or clarifier flush.

“For the best characterization of the performance of the clarifier, make turbidity readings on the influent and effluent at least once per hour throughout a run. It is important to do this frequently since, under certain conditions, the removal across the clarifier can change significantly throughout a run.

The filter effluent turbidity (if not recorded continuously) should be checked frequently; as often as once every half-hour for an in-depth characterization.”

With the data collected, other items can be computed to thoroughly understand the processes. For instance, knowing the inter-stage turbidity is helpful to determine the percent solids removed.

In many cases, if the chemistry is properly dosed, percent of solids removed can be fairly high. Many regulators require turbidity of 1.0 NTU or less on top of the filter.

For example, for the clarifier at hour 3:

And for the filter:

By reviewing the current operation of an existing water treatment plant using the parameters as noted, the best time to flush the clarifier or backwash the filter can be determined based on minimizing breakthrough.

The graph below shows the ideal operation of a filter, which can also apply to a package plant clarifier.

The blue line uses the headloss axis on the left as a function of time on the lower axis. As time goes forward, headloss across a clarifier or filter can be steady for a period of time then increase until it reaches a terminal headloss, at which time a clarifier flush or filter backwash is initiated.

The green line represents the turbidity out of the clarifier or out of the filter and as show if fairly steady over time until it cannot hold any more solids. It is at the point when both terminal headloss and breakthrough occur that the system is running at maximum efficiency, shown by the red vertical line. The goal is to get as close to the breakthrough point as possible without exceeding it.

When reviewing an operating packaged water treatment plant, monitoring headloss across a clarifier or a filter is very useful as seen on the graph (below) that was done using a data logger and SCADA system. The same graph could have been generated using the table previously mentioned.

The graph shows both clarifier headloss and filter headloss versus time. Headloss is reported as inches of water column. The clarifier is flushing about every 2- 3 hours. Since influent turbidity is not shown here, changes in raw water turbidity between these events can reflect some variability.

For the clarifier, the headloss after each event returns fairly close to the initial setting, indicating that it is being adequately cleaned. The filter shows corresponding changes in headloss, because flow to the filter stops during the clarifier flush. The spike at 10 hours would indicate the headloss has increased and likely to trigger a backwash soon.

Collecting filter headloss data for more than 10 hours would provide a better profile.

This graph shows run time in hours and minutes on the horizontal axis and turbidity on the vertical axis and is a good example of the difference between raw water turbidity (dark blue) and coagulated turbidity (green). 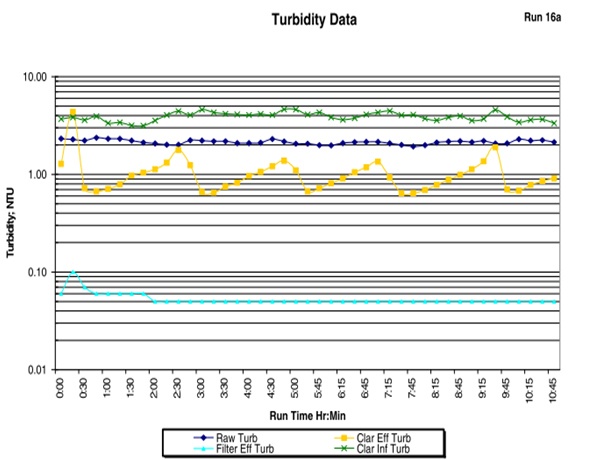 The coagulated turbidity is often higher than the raw water turbidity due to the added chemistry used to coalesce solids or treat color. The yellow line shows the inter-stage turbidity and the light blue shows effluent turbidity. None of these curves reflect any turbidity breakthrough.

In the normal operation of any plant there comes a point, noted by turbidity breakthrough, when the media can no longer hold any more solids. These values should be kept on file and used when treating similar waters and chemical treatment.

Using the Data to Improve Operations

Once the data has been collected and plotted, there are a number of things that can be done to improve the operation.

In all cases, before making any major change to your full scale operations, contact your local regulators or rural water association.

Optimizing operations will save days of potential backwash time and money on an annual basis.

One example regarding improvement of operation in waste volume could be if a clarifier run time was extended an additional hour. A one MGD package plant that flushes the clarifier every 4 hours and backwashes the filter every 8 hours could reduce the waste volume produced by 10%, if the clarifier ran 5 hours between flushes. The increase of just one hour between flushes reduced the number of flushes per day from 6 to 4.8. Furthermore, assuming a flush duration takes 15 minutes, the plant will extend the run time such that an additional 10,500 gallons can be produced.

This simple method of monitoring the performance of the steps within the overall treatment process will produce the least amount of waste, optimize use of chemistry, and maximize utilization or net production.

Richard Ross, P.E., is an Eastern Regional Product Manager for WesTech Engineering, Inc. He is based in Natural Bridge, New York.

Scott Pallwitz, P.E., is a Unit Product Manager for WesTech Engineering, Inc. He is based at WesTech’s office in Ames.

Eric Hessing is an Application Engineer for WesTech Engineering Inc. He works from WesTech’s office in Ames.