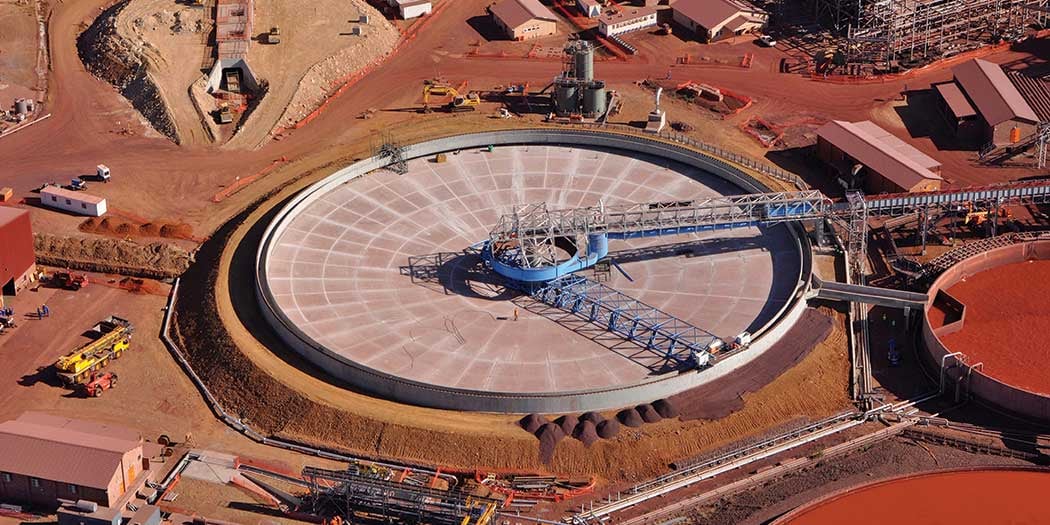 Mine tailings disposal, and its impact on water usage, is an important concern for any mining company. The challenge today, whether extracting aluminum, zinc, gold or iron ore, is how to dispose of tailings material such that it is contained and stable, while maximizing water reuse and minimizing surface footprint.

Paste, or thickened tailings, has become an increasingly important method to address many of the environmental problems facing the mining industry. Pasting was originally developed by the alumina industry in the 1970s, and for the past 20 years has been applied worldwide.

Yet today, less than 1 percent of iron ore mines employ systems for paste thickening, despite its benefits for tailings disposal optimization.

In Chile, for example, where coastal desalinization plants are needed, water reuse is critical, prompting mining operations to explore the most efficient options for water reclamation in tailings disposal.

In Peru’s huge mining sector, and similarly in Brazil, stiffer environmental regulations are in place for mining operations today.

Once tailings dams are a failure risk, near capacity or unstable, only immense capital investment can rectify the situation. Yet, many mines could minimize or delay exorbitant cost by reducing water volumes put into their tailings disposal facilities. They would thereby improve capacity and stability, while reclaiming more water for reuse in upstream washing, screening and jigging.

Water reuse in mining tailings disposal is particularly critical in arid and semi-arid environments where water availability is limited and usage closely regulated by government mandates — for example, in the semi-arid climate of South Africa. There, one iron ore mining operation has successfully adapted its tailings disposal and water reuse procedures to this environment, i.e., the Khumani iron ore mine in Northern Cape Province.

Iron-ore deposits are found about 60 kilometers north of the Beeshoek mine on the Bruce, King and Mokaning (BKM) farms, adjacent to Kumba’s Sishen iron ore mine. The Khumani mine is part of Assmang Ltd., jointly owned and controlled by African Rainbow Minerals Limited and Assore Limited.

Since 2008, Khumani has produced about 16 million tons of product annually. After primary and secondary crushing, iron-ore processing involves wet washing and screening, jigging, and fines recovery using de-grit cyclones. It all requires water in large volumes and the mine’s success is dependent on water recovery.

This area is a semi-arid climate, yet it supports a number of large mining operations, and an ever-growing local population and assorted infrastructure, so there is a limited quantity of water available for distribution by the Sedibeng water management board, says Thomas Du Toit, metallurgical manager, Assmang Iron Ore. This created a number of challenges for the Khumani mine, as our preferred process involved wet processing, but we did not have the available water.

High evaporation rates were a fact of life and suitable sites were lacking for a conventional tailings facility, continues Du Toit, We needed to design a system that could recover most of the water, and not lose a large percentage to evaporation.

To maximize water reuse, the Khumani plant contracted with WesTech Engineering to design and implement a two-stage tailings thickening process. The first stage consists of two primary high-rate traction slurry thickeners, each 295 feet in diameter, situated at the main plant. The first was installed in 2008, with the opening of the mine. The second was added in 2012 to accommodate a 100 percent increase in throughput capacity.

The thickeners operate as clarifiers, returning the bulk of clarified water to the main plant at the combined hydraulic flow rate of 525,000 to 635,000 cubic feet per hour. These thickeners recover approximately 90 percent of the slurry water by volume.

Most mining facilities would then deposit the tailings slurry directly into a tailings pond at about 40 percent to 50 percent solids. But this high-rate primary thickener was inadequate to produce slurry densities required for the desired water reclamation.

WesTech’s solution used paste thickening technology to facilitate a second-stage tailings thickening process. Dilute slurry from the primary thickeners is pumped a distance of approximately 3 miles – to an area with adequate storage capacity for the expected 25-year life of the mine – to feed two 59-foot diameter paste thickeners at the plant’s paste disposal facility. The first paste thickener was put into place in 2008, and the second installed in 2012.

The paste disposal facility requires a minimal solids concentration of approximately 58 to 60 percent by mass, in general. This is done, in part, to enable pumping of the thickened slurry to the outer limits of the dam wall using centrifugal pumps, but also to allow the material to be deposited in layers of less than 4 inches to ensure effective drying and consolidation.

The facility was three-dimensionally modelled for an accurate determination of relationships amongst height, area and capacity. How quickly average production rates were expected to rise and the expected life of the facility were estimated. The facility was designed as an impoundment of compacted earth embankments into which the tailings stream is deposited. Construction is phased, with the facility built to accommodate tonnage expansions.

Khumani’s secondary paste thickening process delivers substantial benefits, Lake says. Not only does it recover water, which can be reused in the plant, but it also leaves less water in the deposit site. In a paste disposal, because of the nature of paste tailings, the particles within it are well distributed.

As Lake explains, coarse particles, 200+ microns in size, are uniformly intermixed with the finer material of less than 20 microns.

Therefore, in the non-segregating deposit, he explains, this homogeneous particle distribution facilitates water being pulled up to the surface by capillary suction where it can be evaporated. In addition, the beach angle of the deposition forces frees water to accumulate at the low point of the PDF, to be collected and reused by the plant.

The process is quite different, however, in a conventional slurry tailings dam, Lake continues.

The slurry segregates into coarse material that settles out first at the deposition point, he says, and the ultra-fines are carried further into the tailings facility. Because the ultra-fines have segregated from the coarse material, they do not tend to settle over time, and the free water on the tailings pond cannot be reclaimed for reuse, as is.

The result is a long-term wet deposition with liquid fractions inside the tailings pond, which if breached can result in dam failure. This condition is unlikely to occur with paste deposition where balanced distribution of course and fine particles, coupled with reduced water content, deliver compact space use and better structural integrity within the tailings dam.

An additional benefit is that paste tails tend to dry and form a hard crust. Conventional tailings have a fine powder deposition that can create dust pollution.

The Khumani project demonstrates it is possible to build and operate a wet processing iron ore mining operation in an arid environment where water supplies are limited, providing an integrated design philosophy and sound engineering practices are in place.

Two-stage water recovery and paste disposal has been successfully implemented at Khumani Iron Ore Mine in a unique installation, by any standard, Du Toit says. Combined use of primary and secondary thickeners in iron ore mining has rarely been implemented.

A large 295-foot diameter primary thickener is integrated with a secondary paste thickener located three miles away at the paste disposal facility.

The system provides long-term environmental and cost efficiencies that few, if any other iron ore mining facility, can realize, Du Toit says.