Producing Clean Drinking Water Regardless of the Elements

As plants are installed further north, water treatment performance can be affected by the elements, such as colder weather conditions, wind blowing across the water source, and formation of organics.

The Northern Village of Ile a La Crosse, Saskatchewan, operates a surface water treatment plant for their drinking water supply. The existing facility, which serves 1,600 residential and commercial businesses, was at design capacity, and thus was having difficulty keeping up with demand. Further, the water treatment plant was struggling to meet regulatory requirements.

UMA Engineering LTD examined the system and made water treatment plant upgrade and water supply recommendations, which led the plant to select the new Trident® HS700A unit single tank system rated for 79.5 m3/hr (350 gpm), which is now installed and in operation. The issue with the outdated water plant was its ability to treat water obtained from a shallow bay in Lac lle a la Crosse where growth of algae is not uncommon. The algae growth creates issues with blockage of intake screens that detrimentally affects the water treatment process. Note the algae also adds an organic load to the water treatment system.

The outdated treatment plant consisted of a WesTech (formally USFilter) Water Boy™ (WB), rated for 22.7 m3/hr (100 gpm), that was installed 30 years ago. The WB consists of two barriers – 7½ degree tube settlers followed by a mixed media filter. Note the system is equipped with coagulation/flocculation mix section prior to the tube settlers and filter.

The lle a La Crosse water treatment plant (WTP) upgrade is a three-phase project. A new water reservoir was built in the first phase. The second phase will involve constructing a new building to house the water treatment plant equipment and several upgrades to the system. The third phase will involve investigations and work related to the raw water supply, water lines, and infiltration wells.

As stated earlier, the 30-year-old water treatment plant was not consistently meeting Saskatchewan Environment guidelines for treated water turbidity and CT10 requirements to achieve the required log removal for Giardia.

Based upon the Saskatchewan Ministry of Environment (SME) A Guide to Waterworks Design – EPB 201, design target requirements for turbidity and log removal for Giardia are noted as follows:

A water treatment plant should be designed so that the treated water meets turbidity and other water quality standards specified in the regulations. In general, treatment facilities for a surface water source or groundwater source directly affected by surface water shall include screening, coagulation-flocculation, sedimentation, filtration, taste, and odor control and disinfection to ensure greater than 3-log (99.9%) removal and/or inactivation of Giardia Lamblia cysts and Cryptosporodium parvum oocysts and 4-log (99.99%) removal and/or inactivation of viruses.

1. Overall inactivation is met using a minimum of two disinfectants:

3. Average daily source water turbidity levels measured at equal intervals (at least every 4 hours), immediately prior to where the disinfectant is applied, are around 1.0 NTU but do not exceed 5.0 NTU for more than 2 days in a 12-month period. Source water turbidity also does not show evidence of protecting microbiological contaminants.

The Trident HS system is designed with 4 barriers: Barrier 1 consists of 60 degree tube clarifier section for bulk solids removal with external solids recirculation for improved clarity and chemical reduction; Barrier 2 is an up-flow adsorption clarifier that uses patented scarified buoyant media; Barrier 3 is a mixed media filter; and Barrier 4 is UV disinfection. The plant introduces chlorine into the system for disinfection and to maintain a residual in the distribution system. 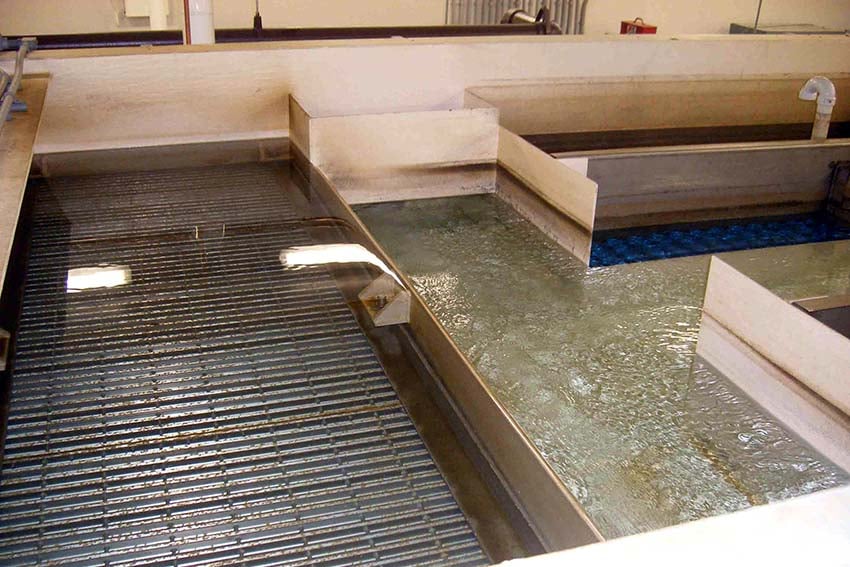 This plant was designed for turbidities up to 400 NTU to preempt increased seasonal conditions and added solids due to increased organics and turbidity load. The Trident HS system was designed to treat raw water with the following criteria:

The Trident HS water treatment plant was commissioned in August of 2008.

Water quality can change depending on seasonal conditions such as algae growth or wind blowing across the bay, stirring up turbidity that can spike above 9 NTU; but, for the most part, influent turbidity ranges from 1 to 4 NTU and the TOC around 12 mg/L.

Element of Temperature and Organic Load

Research shows that temperature can have an effect on separation kinetics. Suspended solids and soluble organic carbon removal from very cold surface waters has been one of the most difficult challenges to meet. Typically, a 10 degree drop in the temperature reduces the coagulation reaction kinetics by about half (Wikramanayake, 2007). For example, when compared to a typical summer time water temperature of about 20oC, the coagulation reaction kinetics can be reduced by about 75% in winter time water conditions as the temperature approaches 0oC. In order to compensate for this reduction, the detention time would need to be increased proportionally, or mixing energies would need to be increased as necessary, or a combination of both. However, both conditions are not desirable, as this would increase the footprint and capital cost for the water plant as well as increasing the operating cost. As such, in cold water conditions, it is critically important to optimize the water chemistry. Equally important is the selection of the proper equipment for the application.

The use of a two-stage clarification process to remove TOC from water approaching 0oC in temperature proved favorable in that the added detention time was sufficient for efficient removal. The process utilized was a high-rate, 2-stage, clarification system consisting of a tube clarifier followed by an adsorption clarifier. The tube clarifier stage makes use of external sludge recirculation for improved particle-particle collision efficiency. Typically, the tube clarifier operates at a rise rate of 9.8-12.2 m/hr (4-5 gpm/ft2) of gross clarifier basin area. It is not uncommon to see removal in the range of 50% to 90% of the solids in the raw water, depending on the water quality and chemistry. The AC typically operates at a rise rate of 12-15 gpm/ft2 of gross clarifier surface area with removal in the range of 65% to 85%. The net production can be as high as 95% for the 2-stage system.

In treating cold river water, a 2-stage process is more accommodating to the applied chemistry as well as economical for the application as compared to a traditional single stage solids contact clarifier. The comparatively “slower” tube stage allows for the reaction kinetics to go into completion, while the comparatively “faster” AC stage allows for optimal adsorption and superior separations efficiency both in the contact surface area and tumultuous path the liquid travels.

Across the unit, the Trident HS package plant consistently achieved combined filter effluents turbidity of 0.08 to 0.15 NTU, resulting in removals ranging from 88% to greater than 96%. Removals are based on the addition of a coagulant (neat solution) and polymer (0.5% stock solution concentration) dosages between 5 and 16 mg/L and 2 to 3 mg/L, respectively. The recirculation of pre-flocculated solids from the tube settler at a rate of 5.7 m/hr (25 gpm) for 4 hours to the influent line facilitates the sweeping of the organics and turbidity. Due to gross solids generated, the solids blow down from the tube settler is conducted every 4 hours at a rate 11.4 m3/hr (50 gpm).

The outdated water treatment plant had a lower net production of water and required additional operator attention due to the solids load. In addition, the filter run time under the prevailing conditions was less than 4 hours. Now, with the new plant, the filter run time is currently at 12 hours. According to Ken Raymond, Lead Plant Operator, the filter system could easily run for 24 hours before going into a backwash, but we are comfortable at 12 hours.

Water Boy Versus Trident HS (Then and Now)

In determining the performance of each respective treatment system, plant performance data was evaluated. This exercise was primarily to gauge the effectiveness of the treatment system as it relates to the respective source water and conditions. The Trident HS is better suited for flashier waters and colder water conditions as expected from the lle a la Crosse WTP site. It certainly seems fitting that the use of a tube settler for bulk solids removal will have a positive effect on both down stream equipment (i.e., longer filter run times, higher net production of finished water, ability to maintain consistent plant performance, low waste handling and volume, etc.). This, coupled with an automated control system that can either flow pace chemicals or make changes to system operation via turbidity, has been found by many plant operators to be a big benefit.

System performance, according to plant personnel, is exceptional, with a higher net production of water and minimized waste production. But even more important, the system is meeting regulatory requirements as set forth by the Saskatchewan Ministry of Environment.