The minerals industry has faced increasing pressures in recent years in the management of tailings streams. Environmental, economic and other factors have led many minerals producers to explore the technology of making and using “paste.” With the increasing number of installations worldwide, this technology has proved to not only be industry accepted, but economically advantageous. The ability of paste thickeners to produce a higher concentration underflow leads to significant water recovery and savings and also reduces the cost of containment structures.

The most common uses of paste technology employed in tailing streams are surface stacking and water recovery. However, as more research and testing are performed, additional applications for paste technologies are being considered and implemented.

Another important property of paste is yield stress. The yield stress (most commonly presented in units of Pascals) can be considered as the pressure required to make paste flow. Concentration and yield stress are directly related, and are often called the “yield stress curve.”

As the solids concentration increases, the yield stress increases, more particles become non-settling, and the “thicker” the paste becomes. At sufficiently high solids concentrations, the paste becomes, in essence, a solid with characteristics similar to a filter cake. These paste characteristics are important to consider in the design phase as the fluidity of the paste will direct the pump selection and cost.

Common applications are based on paste as produced in a flow sheet that includes a thickener and underflow pumps that are typically centrifugal, as well as transfer pumps that can be either centrifugal or positive displacement.

This increased water recovery is important to many countries throughout the world due to the scarcity of fresh water. The more water that can be recovered from a tailing stream, the more that can be used again upstream in the plant. This reduces the amount of fresh water the mines need to introduce into their process, saving that fresh water for the surrounding cities and populations. The cost of water is often one of the main drivers for implementing a thickened or paste-tailings disposal system. When water is expensive or scarce, water savings can more than pay for the cost of thickened tailings. 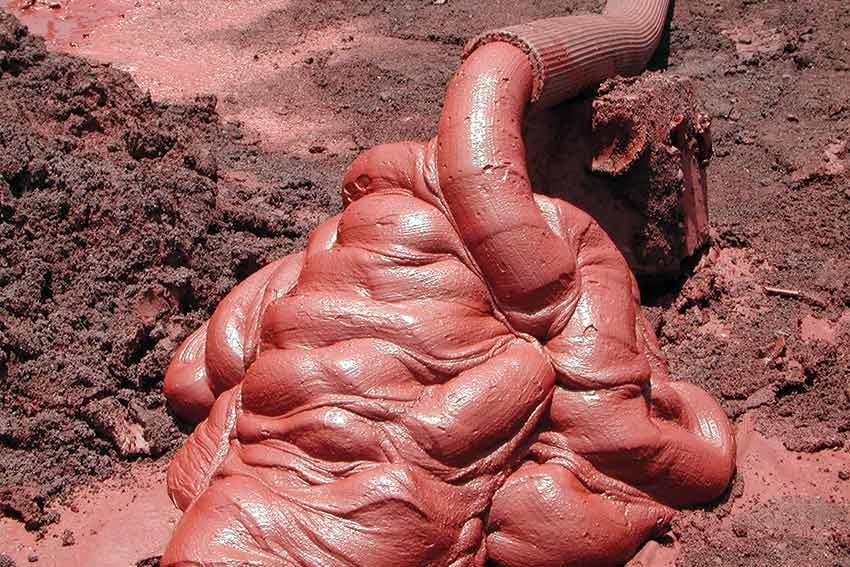 Surface stacking is the disposal of tailings as a paste on the surface of the ground. As paste is a non-settling, non-segregating suspension of solids, minimal water is released into the impoundment and the paste dries relatively quickly compared to a pond where fines (slimes) segregate and can seal the deposit, preventing drying.

Stacking as a method of tailings disposal offers significant advantages over ponding. The most obvious benefit is the smaller impoundment area. In addition, there is less water in the pond. This improves water or chemical recovery, lowers risk of containment breach, creates less groundwater contamination, and provides for easier final reclamation of the site. The benefits of surface stacking as compared to conventional ponding of tailings are great and are being realized by many locations throughout the world today.

As the technologies for product recovery have improved throughout the years, many old tailings ponds have been discovered to contain significant amounts of value. Recently, companies, including coal and iron ore producers, have devised processes that enable them to remove the slurry from the pond, reprocess the slurry, and recover the ore values that were at one time lost.

The tailings from this reprocessing need to be returned to the original pond. Paste thickeners have been utilised to thicken the reprocessed tails to a non-settling, non-segregating paste which is then deposited sub-aqueously back into the pond. When the paste tailings are deposited in this manner, the pond water is displaced and recovered. Over time, the pond water is recovered and the pond is transformed into a paste deposit which will dry since no additional free water is being introduced.

Seal Tailings Pond That Is Leaking

The liquid portion of tailings slurry ponds can infiltrate the surrounding ground, causing environmental and other problems. In one case, a permeable rock strata in an otherwise well-sealed pond allowed for infiltration of pond water into the water table. In another case, an underground mine below a slurry pond was threatened because of the infiltration from the pond into the mine. The solution to this type of problem is to thicken the tailings stream to paste and deposit it into the pond as a non-suspending paste. The paste will reduce the amount of water infiltration and may also seal the leak.

When tailings ponds reach their capacities, the construction of a new dam and pond is usually the solution for the deposition problem. This solution is very expensive and is not always an option if there are environmental and space constraints.

By utilizing a paste thickener to thicken the tailings stream to paste and depositing the paste into the pond, the life of the pond will be increased. Not only will the existing free water in the pond be displaced and available for recovery, but the higher concentration and non-settling properties of the paste will take up less space and extend the life of the pond.

When a tailings deposit from an old mine is located adjacent to a populated area, dust can be a big problem and the land may be in demand for development. Even if there are plans to remove the deposit, trucking may not be an option. A less-expensive alternative is to re-slurry the tailings, pump them to a new location, thicken in a paste thickener, and deposit onto a new site without the need for an expensive dam. There can also be a side benefit of reprocessing the old tailings to recover metal values.

Many applications require high solids concentration which requires the use of a filter. By using a paste thickener to concentrate the tailings stream to concentrations higher than that which is achievable by conventional or high-rate thickeners, the subsequent filter can be reduced in size. This option is attractive to many plants as the operating costs of filters are very high. This option decreases not only the size of the filters, but the number of filters, and is an economical solution that demands consideration.

Operate a Filter and Paste Thickener in Parallel

Washing is typically required for recovery of soluble, valuable metals or salts from tailings. This can be accomplished in a counter-current decantation (CCD) circuit. A CCD circuit is a series of thickeners in which the flow of solids proceeds in a direction counter-current to the flow of solution diluents. Each washing stage is composed of a mixing step followed by thickening of the solids from the suspension.

Mine backfill is defined as the material or materials used to fill the cavities created by underground mining so as to establish and retain safe working conditions, economically. Backfilling with tailings paste to which a binder, such as cement, has been added to provide structural strength also allows for mining productivity improvements. Paste thickeners can be utilised in the backfill process to prepare the slurry for addition of binder for pumping into the underground cavities.

Common occurrence in a mineral process plant is fine and coarse tailings streams. For example, consider a mine that produces three tailings streams, fines with a particle size of minus 100 µm and coarse with a 100 µm to 1 mm range, and screenings of plus 1 µm.

Conventionally, the fines stream would be thickened and pumped to a dam, the coarse cyclone underflow stream and the screenings dumped. Co-disposal with a paste thickener offers an opportunity to handle the three streams as one disposal. A disposal site is created without ponds, and this potentially allows for early reclamation of the land for reuse.

The use of paste tailings technology has been expanding over the past 20 years, not only because of environmental and water shortage drivers, but also cost reduction, product recovery, and process efficiency requirements. The applications both implemented and under consideration are increasingly diverse and include all minerals tailings. The starting point to identifying the potential use of paste tailings is to understand the properties of paste. Tailings handling designers should always consider a paste option alternative to the conventional slurry solution.

Water Reuse: The Potential for Ultrafiltration and Reverse Osmosis